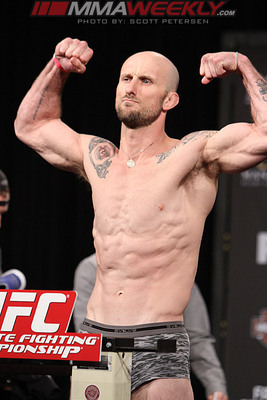 Bubba McDaniel is ineligible for regional rankings due to inactivity.
Fighters must have at least one completed MMA bout in the past two years to be ranked.

Robert "Bubba" McDaniel Jr. was a member of Team Jones on the 17th season of The Ultimate Fighter, Bubba is also a training partner of Jon Jones.  He would finish Ryan Bigler in the 2nd round by TKO to earn his way into the house and be the third pick by Team Jones.

In the 4th episode Jon Joes selected Bubba to fight Team Sonnen's 7th round pick Kelvin Gastelum. McDaniel lost the fight with Kelvin via 2nd round rear-naked choke.  He was then chosen for the wildcard spot and advanced to the quarter-finals after defeating Kevin Casey via a TKO when Casey could not answer the bell for the third round.  This is however where his TUF adventure came to a halt, as he was then knocked out by the eventual finalist Uriah Hall in only 9 seconds.

Despite the two losses, McDaniel was (along with every fighter from the TUF 17 cast) granted a fight at the Ultimate Fighter 17 Finale card, where he defeated fellow cast-mate Gilbert Smith via a third round submission.  He would drop his next fight by Unanimous Decision to Brad Tavares. At UFC 171, he was supposed to fight Tor Troeng, but an injury forced his opponent off of the card. He instead took on undefeated, KOTC middleweight champion, Sean Strickland, but he would be submitted near the end of the first round.  This sent his official UFC record to 1-2.