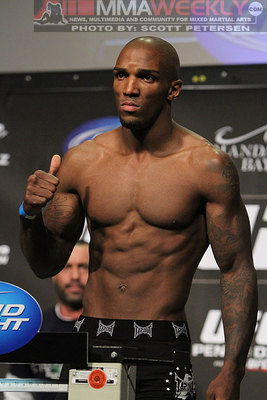 Francis Carmont is ineligible for regional rankings due to inactivity.
Fighters must have at least one completed MMA bout in the past two years to be ranked.

Francis "Limitless" Carmont is a French born Canadian mixed-martial artist, born on October 10th, 1981 in Paris, France. He began his MMA career in 2004, fighting all over for the Europe promotions. "Limitless" amassed a 16-7 MMA record before signing with the UFC.

Carmont made his UFC debut against Chris Camozzi at UFC 137. He won the fight via unanimous decision. He then stopped Swedish fighter Magnus Cedenblad via 2nd round Rear naked choke at UFC on Fuel TV 2 in Stockolm, Sweden. Carmont earned his third straight UFC victory when he faced Karlos Vemola on July 11, 2012 at UFC on Fuel tv 4 in San José, California. He was able to submit Vemola with a rear naked choke from the crucifix position.

Carmont was scheduled to face Tom Lawlor at UFC 154 in Montreal, Quebec, Canada. Carmont won the bout via split decision. He would pick up two more wins over Lorenz Larkin and Costas Philippou making it 6 straight for Carmont. However that is where the streak would end as he faced Ronaldo Souza and would lose in a close decision. He would look to get back in the win column when he faced C.B. Dollaway in the Co-Main Event of UFC Fight Night 41 but would lose a decision. He would drop his third straight this time by TKO when he was finished by Thales Leites. Following this loss it was announced that Carmone was cut from the UFC.