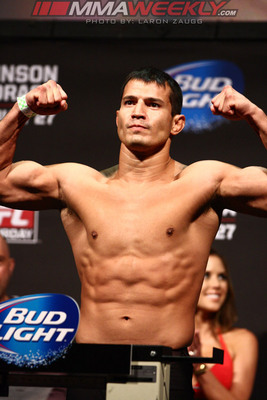 Bobby Voelker is an American welterweight fighter currently signed to the UFC. He trains out of American Juijitsu in Kansas City, Kansas. He has previously fought for MCC, where he held the 170 pound title, Titan FC, Extreme Challenge, M-1, and Strikeforce. He has notable wins over Kyle Bradley and Roger Bowling who he beat twice in three fights in the first ever trilogy series in Strikeforce. Of his twenty four wins, nineteen have been finishes including fifteen T/KOs, although all of his submission win have been due to strikes.

Voelker began boxing and kickboxing in high school. He showed a penchant for fighting throughout his youth, having been incolved in numerous street fights and he was charged with battery when he was eighteen years old. He would take up MMA in order to channel his aggression. He was undefeated in his nine fight amateur career and was ranked #1 in the ISCF amateur rankings. He turned pro in 2006. Bobby would fight in various regional Midwestern promotions for the first three and a half years of his career and would compile a 20-7 record.

In late 2009, Booby was signed by Strikeforce to fight in their "Challengers" series of cards. He would make his debut in his hometown of Kansas City, taking on 10-1 prospect, Erik Apple, who he would defeat by TKO in the second round. His next fight was against Roger Bowling. Voelker would lose a technical decision after accidentally poking Roger in the eye. He was able to defeat Cory Devela by decision two months later and was granted a rematch with Bowling. The pair headlined Strikeforce Challengers: Bowling vs. Voelker II in late 2010. This time, Bobby was able to dominate the fight and picked up a TKO win in the second round. Since they had split their first two fights, they were granted another rematch eight months later and again headlined, this time at Strikeforce Challengers: Voelker vs Bowling III. This marked the first ever trilogy fight in Strikeforce history. Bobby would again pick up a second round TKO victory.

Voelker was moved to the UFC when Strikeforce ceased operations in 2013. He made his promotional debut at UFC 158 after a twenty month layoff. He took on Patrick Cote, but would come up on the short end of a unanimous decision. He was next expected to take on James Head, but was asked to step in as a late replacement against Robbie Lawler at UFC on Fox 8. He would be knocked out by a headkick early in the second round to the future title contender. This sent is record to 4-4 in his last eight fights. He took on William Patolino at UFC 168 and would lose a unanimous decision after being badly bloodied throughout the fight.