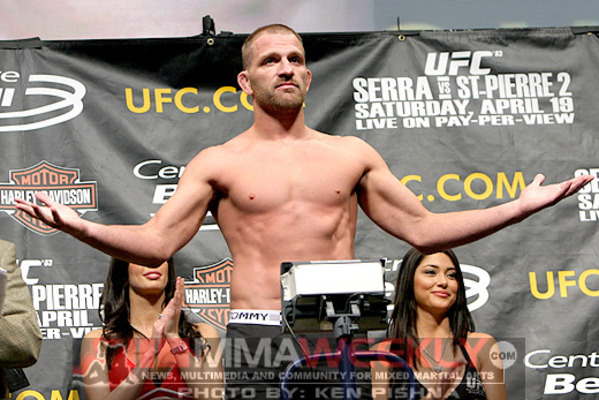 Travis Lutter is ineligible for regional rankings due to inactivity.
Fighters must have at least one completed MMA bout in the past two years to be ranked.

Travis Lutter is a brazilian jiu-jitsu black belt who is known for being the winner of The Ultimate Fighter 4: The Comeback. Before making his way onto the show, Lutter had amassed a 8-3 mixed martial arts record which also included 3 prior UFC fights against Marvin Eastman (knockout victory), Matt Lindland (submission loss) & Trevor Prangley (decision loss). When Lutter was invited to be on the show he quickly put his ground knowledge to work which his victories over Scott Smith (submission victory) & Pete Sell (decision victory) to earn himself a place in the finals of the middleweight bracket against former world title challenger Patrick Côté. While many fought Lutter would have a tough time getting through the striking of the Canadian within 2:18 of the first round Lutter had Côté locked in armbar won him the Ultimate Fighter tournament & submission of the night. A bonus for winning the tournament would be that Lutter was given the chance to fight reigning champion Anderson Silva for the middleweight title. While they still did fight, due to Lutter not being able to make weight it was changed to a three round non title fight, though silva only needed two rounds to lock the submission expert in a triangle choke forcing the tap. For his next opponent the UFC didn't go easy on Lutter as he was matched up against former Champiom & still badass at the time Rich Franklin (post Belfort knockout), Who knockout Lutter in the second round ultimately ending the TUF winners UFC career.
Lutter had 2 bouts outside the UFC against Rafael Natal (knockout loss) & UFC vet Jason MacDonald (decision win).