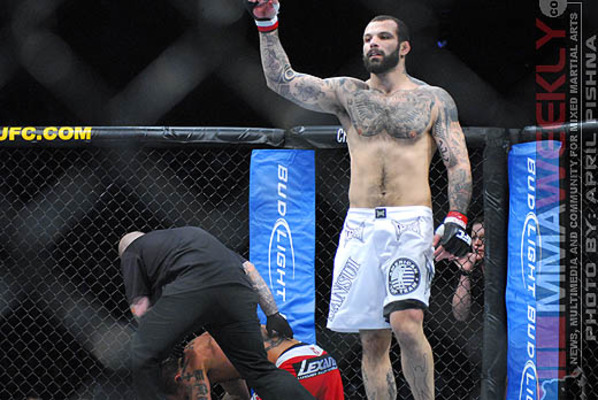 Alessio Sakara is ineligible for regional rankings due to inactivity.
Fighters must have at least one completed MMA bout in the past two years to be ranked.

A prominent striker training out of the famed American Top Team camp in Coconut Creek, Florida, Alessio “Legionarius” Sakara ran his record to 9-3 prior to his UFC debut in 2005. Although he has had mixed results in his UFC career, Sakara has never been cut from the promotion, having defeated notables such as Elvis Sinosic, Thales Leites, and James Irvin during his time in the Octagon.  Of his fifteen wins, eleven have been finishes including nine T/KOs. He earned the "Knockout of the Night" bonus when he landed a head kick against Joe Vedepo in 2008

A talented boxer who has trained in the art since the age of 11, Sakara rarely takes fights to the ground. He will sometimes findhimself in trouble on the feet, though, due to a highly aggressive striking style. Proudly bearing the words “Legionarius Roma” across his heavily tattooed back, Sakara can generally be counted on for a slugfest.

Sakara was able to string a together a three fight winning streak heading into 2010 Despite this, he is currently riding a three fight losing streak, though the last of these was a contentious DQ loss to Patrick Cote at UFC 154. During the fight, Sakara rallied back from an early assault by Cote and had the Canadian veteran in serious trouble but landed a series of shots to the back of Cote's head, leading to the disqualification. A planned rematch at UFC 158 was scratched when Sakara had to pull out due to kidney problems. He next was scheduled to fight Nico Musoke at UFC Fight Night 30. Although it looked like Sakara had the clear advantage early, he was submitted by a lightening fast armbar in the first round. This was a must win fight for Sakara since he was already on a three loss streak and has not won a fight since March, 2010. It is likely that he will be cut from the UFC.

It was reported the week of December 16th 2013 that after going 0-4 in his last four fights, Alessio Sakara was released from the UFC.

If Sakara decides to continue his fighting career, it will be the first time since 2005 that he has fought outside the Octagon.