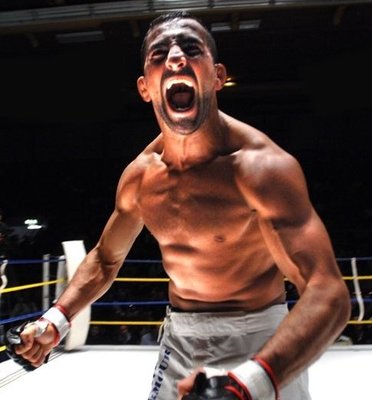 Reza Madadi is ineligible for regional rankings due to inactivity.
Fighters must have at least one completed MMA bout in the past two years to be ranked.

A popular fighter in his home country of Sweden, Reza Madadi caught the eye of the UFC after his fight against seasoned veteran Rich Clementi. The bout was ruled a draw by all three officials, but in accordance with the rules of the sanctioning body in Sweden, the SMMAF, a winner had to be chosen in the case of a draw and Madadi was unanimously given the decision.

He made his long-awaited UFC debut on April 14, 2012, in his hometown of Stockholm at Swedens inaugural UFC event, defeating Cuban Yoislandy Izquierdo in the 2nd round. After finding himself in some trouble on the feet in the 1st, Madadi opted to try and force the fight to the ground and at 1:28 of the 2nd Izqueirdo was forced to tap to a guillotine choke.

His second fight in the UFC came against Cristiano Marcello at UFC 153: Silva vs. Bonnar. The fight was a closely contested stand-up heavy affair, that ended up going the distance, with Madadi on the losing end of a split decision. Complaints were voiced among fans and media regarding the decision. Most mma media had Madadi winning 29-28 and critique was mostly directed at judge Aaron Chatfield's scorecard that saw Marcello winning all three rounds. Madadi would face off against Michael Johnson next and get back to his winning ways with a Darce Choke finish that would also earn him Submission of the Night.

In May 2013, Madadi was allegedly involved in a burglary in Sweden. In August, he was convicted and sentenced to 18 months in prison, along with a six-figure fine for his role in the theft, which he still denies taking part in.