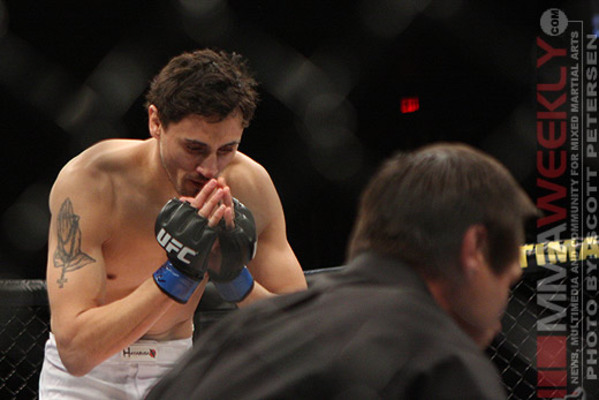 Pablo Garza is ineligible for regional rankings due to inactivity.
Fighters must have at least one completed MMA bout in the past two years to be ranked.

A fighter who goes steps into the octagon to simply finish an opponent, North Dakota's Pablo Garza possesses many tools that help him end a fight in the blink of an eye. In his UFC debut, he floored BJJ standout Fredson Paixao with a flying knee, requiring Paixao to be taken out of the octagon on a stretcher. He followed up this victory at UFC 129, where he submitted Canadian striker Yves Jabouin with a spectacular flying triangle choke. Garza is a dangerous finisher inside the featherweight division. His length and height (he stands at 6'1) are also problems for almost anyone in his weight class.

He would then go on a two fight skid against Dustin Poirier, where he would lose by d'arce choke, then against TUF 14 cast member Dennis Bermudez. Despite clipping Bermudez with multiple upkicks, his takedown defense was exposed as a weakness, as Bermudez had no trouble taking down the lanky North Dakota native. He rebounded with arguably the biggest win of his career in beating former title challenger Mark Hominick at UFC 154.  After an even first round, Garza would dominate with takedowns and ground and pound over the last ten minutes.

His next fight would come against TUF winner Diego Brandao at UFC on Fuel TV 9. He would lose the fight by arm triangle choke in the first round and following the loss he was cut from the promotion. He said he plans to compete in jiu jitsu and do some coaching, it remains to be seen if we might have seen his last MMA fight.