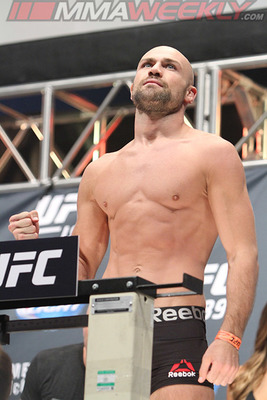 Cathal Pendred is ineligible for regional rankings due to inactivity.
Fighters must have at least one completed MMA bout in the past two years to be ranked.

Pendred is the current Cage Warriors Welterweight Champion, having defeating former champion Gael Grimaud via unanimous decision at CW 52. Pendred had his first title defense against Che Mills at CW 55, defeating Mills via third round TKO.

In December 2013, it was revealed that Pendred was selected to be a participant on The Ultimate Fighter: Team Edgar vs. Team Penn. Pendred became an official cast member without fight  because his opponent withdrew from the fight at the last minute due to not making weight.

Pendred was selected as the third pick of Middleweight by BJ Penn, to be a part of Team Penn. In the Elimination round, Pendred was matched-up against Hector Urbina from Team Edgar. After three rounds, Pendred was declared the winner via unanimous decision. In the Semi-Finals Pendred would face his first lost into the house to Eddie Gordon by decisión, after a close fight.

Despite his lost on to the show, he made his UFC debut against Mike King on UFC Fight Night 46.

King gave a knock down on the first round, but Cathal recovered and submit Mike with a RNC on the second round, he won the Fight Of the Night award after a great performance.

Now, he will face Gasan Umalatov on UFC Fight Night 53 in October.