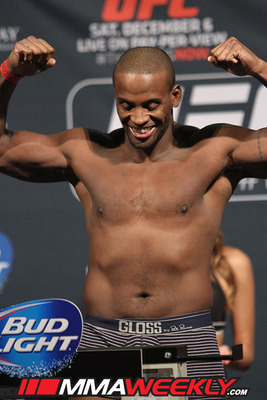 Eddie Gordon is ineligible for regional rankings due to inactivity.
Fighters must have at least one completed MMA bout in the past two years to be ranked.

Eddie ”Truck” Gordon is an American fighter and former Ring of Combat in 205lb who was a contestant of The Ultimate Fighter: Team Edgar vs. Team Penn. Eddie started his MMA Carrer in Ring of Combat,  as Heavyweight fighter. But Eddie dropped down to 205 lbs where he  was champion by UD over Carlos Brooks. In the next bout Eddie lost his belt in Ring of Combat against  Anton Talamantes. After his first lost he had many cancelled bouts until he joined CFA, where he took a win against Oscar Delgado by Rear Naked Choke in round 2.

On The Ultimate Fighter show, Eddie won his spot in the house by UD over Matt Gabel. Frankie Edgar selected Gordon as the third pick of Middleweight. On Episode 8 Edgar picked  Gordon and Mike King in the last fight of Middlewight Elimination round. Eddie defeated Mike King via unanimous decision after three rounds in a “terrible fight” for Dana White. Before his next fight in the house against Penn’s member Cathal Pendred, White expressing his concerns about the boring fights. Eddie Gordon move on the final after he defeated Cathal Pendred in a close fight by split decision.

In Eddie Gordon's first fight following winning TUF, he was scheduled to face season 17 semi-finalist Josh Samman at UFC 181 on December 6, 2014. Gordon controlled most of the first two rounds via wrestling but encountered several stand-ups due to inactivity. Immediately following a referee standup in the second round, Samman knocked Gordon out cold via head kick.