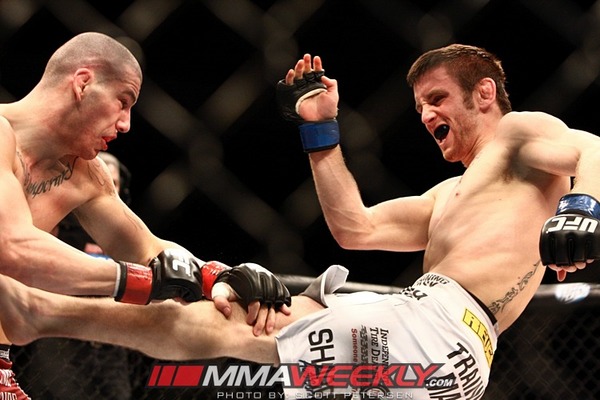 Fighting for a major organization has made Tim Elliott ineligible for regional rankings.

UFC flyweight Tim Elliott did not get off to the most promising start to his MMA career, starting off with an 0-2-1 record. He then won his next eight fights, including a knockout victory at RFA 1 against former UFC lightweight champion Jens Pulver. After defeating Pulver, he then needed only 28 seconds to submit Josh Rave, doing so via d'arce choke. From there, Elliott signed on to fight TUF 14 winner John Dodson.

Elliott gave Dodson a very tough fight when they met at 'UFC on FOX: Diaz vs. Miller,' but would be on the wrong end of a decision in his UFC debut. Elliott's next UFC fight was against Jared Papazian at The Ultimate Fighter 16 Finale. The fight would end up being awarded Fight Of The Night, with Elliott winning a unanimous decision. He would follow that up with another decision victory over Louis Gaudinot at UFC 164. He would follow that with his second UFC loss at the hands of Ali Bagautinov at UFC 167 by unanimous decision, Elliott would also lose the two fights following his contest with Ali Bagautinov, Joseph Benavidez won by submission against Elliott on UFC 172 and in February 2015 Elliott would lose to Zach Makovsky after taking it to the judges in Broomfield Colorado.

After Elliott's 3 fight losing streak the UFC would release him and Elliott would sign with Titan FC where he would win the Titan FC Flyweight Championship against Iliarde Santos on his debut and defend his title twice against Felipe Efrain and Pedro Nobre.

In 2016 Elliott would appear on the 24th season of The Ultimate Fighter, a season where the winner would be rewarded with a shot at the UFC Flyweight Championship against UFC legend Demetrious Johnson. Elliott would be the first pick of coach (and former opponent) Joseph Benavidez. In his first fight on TUF 24, Elliott would submit Charlie Alaniz from Team Cejudo, Elliott's quarter-final fight would see him face-off with Matt Schnell in a contest that Elliott would again win by submission. In the Semi-final Elliott would fight his team Benavidez teammate Eric Shelton, Elliott would win this fight and move on to the final, in the final Elliott would be victorious against Hiromasa Ogikubo after taking it to the judges and securing the unanimous decision victory.

Elliott would return to the UFC after The Ultimate Fighter 24 and not just for a chance to prove he should be in the UFC but for a shot at the UFC Flyweight Championship against Demetrious Johnson. Elliott would take Johnson to a decision that Johnson would win unanimously. Following his shot at the UFC Flyweight title, Elliott would stay in the UFC and win 4 of his 8 fights, notable names that Elliott defeated include Louis Smolka and Ryan Benoit, Elliott would also get Fight of the Night honours twice during this period. At the time of writing this wiki Elliott has a record of 17-11-1 (6-9-0 in the UFC).