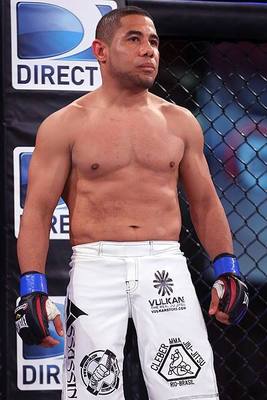 Cleber Luciano is ineligible for regional rankings due to inactivity.
Fighters must have at least one completed MMA bout in the past two years to be ranked.

Cleber Luciano is a Brazillian lightweight fighter currently signed to Bellator. He holds a fourth  degree black belt in Brazillian Jiu Jitsu under Royler Gracie as well as a black belt in Judo. He runs his own BJJ gym in Huntington Beach, California where he counts Evangelista Santos among his students. Cleber was the grappling coach on the eleventh season of The Ultimate Fighter for Team Ortiz. He has finished all but one of his eight wins including six submissions, but he has also been stopped in four of his five loses including three T/KOs.

Luciano took his first professional MMA fight in 1998 and won by TKO. He would lose his next fight and took a nine year hiatus from professional MMA. He would return to competition in 2007, but ended up losing both of his fights that year, including a submission loss to future UFC competitor, Evan Dunham. He would again take a break from the sport until 2009. Over th next three years, he would compile a 6-1 record, with his only loss coming to Chris Saunders.

Cleber was signed by Bellator in 2012 made his promotional debut against Mario Navarro at Bellator 85. He would win the first decision of his career and keep his Bellator career alive. He would then get quickly knocked out by Nick Piedmont at Bellator 92 less than two months later. He next took on Joe Camacho at what was supposed to be Bellator's inaugural Pay Per View event, but when the PPV was scrapped, he fought on the Bellator 106 card which replaced it. He was able to pick up a unanimous decision win.