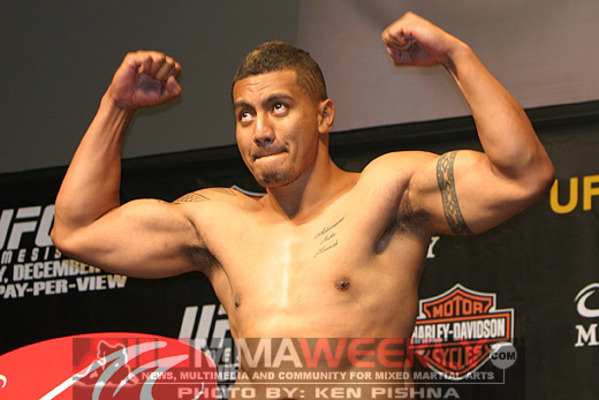 Soa Palelei is ineligible for regional rankings due to inactivity.
Fighters must have at least one completed MMA bout in the past two years to be ranked.

in 1977, Newcastle, New South Wales, Soa Palelei started his fighting career at an early age. Wrestling was his first choice in the earlier years and nearly saw him compete for Australia at the Sydney Olympics. His interest quickly grew in the arena of martial arts and from there his love of mixed martial arts grew.

Palelei made his professional MMA debut in September 2002. He was undefeated for the first two years of his career, going 7-0 with all wins either by TKO or submission. He suffered his first defeat via submission to Mu Bae Choi at PRIDE 28 in October 2004.

Palelei had a brief stint in the UFC at UFC 79 against Eddie Sanchez, losing by TKO in the third round. He was released from the promotion shortly after. After his release from the UFC in 2007, Palelei went 10-1 including wins over UFC veterans Brad Morris and Sean McCorkle.

In March 2013, Palelei signed a multi fight deal with the UFC. Palelei was expected to face Stipe Miocic on 15 June 2013 at UFC 161 until Miocic was reassigned to fight Roy Nelson as a replacement main card. His first fight would be at UFC 164 against Nikita Krylov. Dana White was not impressed with the performance because both men seemed to be completely gassed not long into the fight. However Palelei was able to get the finish in the third round and it is also worth noting that Soa apparently came into the match with an injury and he was having a hard time breathing.

Soa would however improve on his performance in his very next fight by immediately taking down, mounting and pounding unconscious the accomplished striker Pat Barry in what proved to be Barry's last MMA fight before retirement. He would get another 1st round TKO in his next bout against Ruan Potts making it 3 straight wins in the UFC. His next test will be against Jared Rosholt at UFC Fight Night 43.