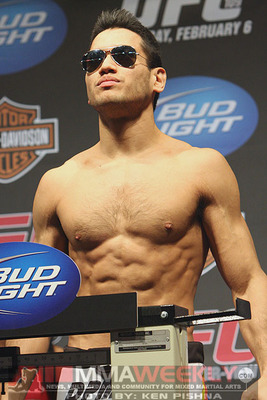 Phillipe Nover is ineligible for regional rankings due to inactivity.
Fighters must have at least one completed MMA bout in the past two years to be ranked.

A male nurse from Brooklyn, New York, Phillipe Nover wasn’t given much of a chance by fighters and fans after he fainted in the debut episode of The Ultimate Fighter 8 due to heat exhaustion. Only a few fights later, the dynamic Nover was one of the most hyped young prospects in the promotion after he battled his way to the finals against Efrain Escudero in December of 2008. But following a Decision loss to Escudero, Nover was defeated in back-to-back fights by Kyle Bradley and Rob Emerson, and was promptly cut by the UFC in 2010.

Nover’s fate has been lamented by analysts of the sport, as many feel he was unfairly pushed as a world beater, with his promoters making him out to be the next best thing in the world, even going so far as to compare him to a younger version of Anderson Silva or Georges St. Pierre.

Episode 1 Nover def. Joe Duarte by Rear Naked Choke at 3:33 of Round 2

Episode 8 Nover def. David Kaplan by Rear Naked Choke at 1:27 of Round 1