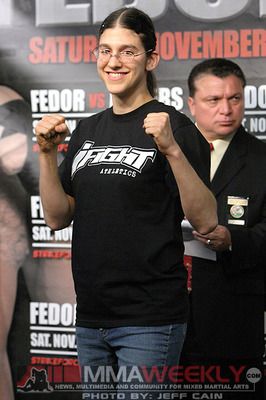 Fighting for a major organization has made Roxanne Modafferi ineligible for regional rankings.

Roxanne Modafferi is an American womens bantamweight fighter currently signed to the UFC. She is a purple belt in Brazilian Jiu Jitsu as well as a brown belt in Judo and currently trains out of Syndicate MMA in Las Vegas, NV. She is a true veteran of Women's MMA and has fought for many of the earliest promotions that offered WMMA fights including Smackgirl, HOOKnSHOOT, IFC, Ring of Combat, Shooto, BodogFight, K-GRACE, Fatal Femmes Fighting, Strikeforce, KOTC, Moosin, Strikeforce, Cage Warriors and Jewels. She holds wins over many prominent female fighters including Keiko Tamai, Jeniffer Howe (two times, marking Jennifer's only loses in a seven year career), Marloes Coenen, Vanessa Porto and Tara LaRosa. Roxanne has held the IFC and ISKA women's middleweight title, FFF lightweight championship and won the K-GRACE women's openweight eight woman, one night tournament. Of her fifteen wins, five have been finishes including four submissions.

Modafferi began training in various martial arts in high school including Tae Kwon Do, Kenpo Karate and Judo where she earned a brown belt. She said of her beginnings in martial arts that "I thought I was all cool doing Karate, like the movie stars, but then in Judo I learned what it was like to fly."  While she attended college at the University of Massachusetts Amherst, she trained briefly at the Royce Gracie Brazilian Jiu Jitsu Association. She trained at a variety of gyms throughout New England during her college career including associate gyms of Brazilian Top Team and Sityodtong Mauy Thai.

During her Junior year of college, Roxanne spent a year studying in Tokyo. While there, she had the opportunity to compete in a number of NHB fights and BJJ competitions. During this time, she was able to run her professional record to 3-0. She was given her first fight in the US in 2004 against Jennifer Howe who many considered to be the best female fighter in the wold and was undefeated. Modafferi was able to pick up a unanimous decision. Later that year, she returned to Japan to participate in an eight woman, one night tournament for Smackgirl. She won her first fight but would suffer her first loss in the semifinals to Megumi Yabushita. She would return to action the next year in a rematch with Howe in which she picked up a submission win in the third round. She would suffer another loss when she fought just two weeks later. In May of 2005, she graduated from the University of Massachusetts Amherst with a Bachelor's degree in Japanese Language and literature and a minor in Linguistics.

After Graduating, Modafferi was able to secure a job in Japan teaching English. After a year long break from competition, she would alternate wins a losses over her next four fights including winning the Fatal Femmes Fighting lightweight title. In 2007, she would enter the K-GRACE eight woman, one night tournament. She finished her first fight with an armbar, her second by decision and was able to defeat the highly touted Marloes Coenen by split decision to win the tournament. After another year long layoff, she would return with two more wins before taking yet another year long break.

In 2009, Roxanne fought in a rematch with Marloes Coenen in her debut with Strikeforce but would fall to an armbar early in the fight. She would win her next two fights including a split decision over fellow veteran Tara LaRosa. She was given a shot at the Strikeforce women's bantamweight  title against future UFC fighter, Sarah Kauffman, but would lose by highlight reel knockout when Kaufman slammed her late in the third round. She would continue to find hard luck when she lost a decision to another future UFC fighter, Rosi Sexton, in the Cage Warriors promotion. She would go on to lose her next three fights as well, marking a career low.

In 2013, Modafferi was selected to be a competitor on The Ultimate Fighter 18 in which both men and women were featured for the first time. Going in to the competition, she was one of the women that was thought to go far in the competition due to her experience despite the five fight loss streak she was on. She beat Valerie Letourneau by rear naked choke in the first round inthe preliminary round to get into the house . On episode four of the show, Roxanne faced the eight time world boxing champion and future TUF finalist, Jessica Rakoczy . Round one was a close back and fourth fight with Roxanne winning on the ground and Jessica winning on the feet. The second round, Roxanne was visually gassed which Jessica took advantage of with her crisp boxing skills. After a slam reminiscent of her fight with Kaufman that dazed her, Roxanne lost by TKO due to strikes in the second round.

After her time on The Ultimate Fighter, Roxanne felt that she had one shot left to reinvigorate her career. "...after the TUF show ended in July, I was so impressed with the training I got, and detailed instruction in English (as opposed to Japanese). I had lost my fight to Jessica, and didn't know whether or not I'd be offered a fight in the finale. But what if? I had saved enough money to be alright without a job for a bit. I'm 31 years old, with 10 years of fighting under my belt. If ever was a time for me to give this my all, it's now. It wasn't before, where the support just wasn't there. NOW females are in the UFC. So I gambled on the CHANCE I'd be offered a fight, I quit my wonderful job in August and moved back to America September 1st. Former coach Bryan Caraway suggested Las Vegas. I visited some gyms and chose Syndicate MMA as my gym." It was announced in November 2013 that Roxanne would in fact receive a fight on the finale card along with all other non injured women from the show. After the final episode of the season, it was revealed that she would fight semi finalist Raquel Penningtion. Although she looked to be the more aggressive fighter early in the fight, the larger and more powerful Pennington was able to pick up a unanimous decision win. This extended her loss streak to six.