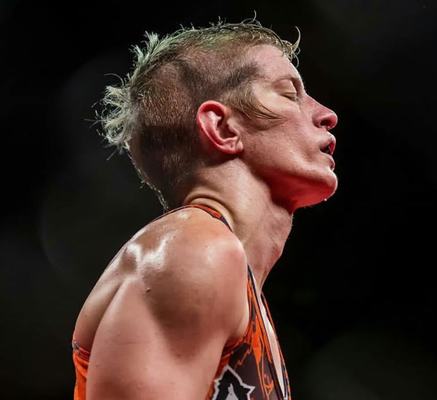 Sarah D'Alelio is ineligible for regional rankings due to inactivity.
Fighters must have at least one completed MMA bout in the past two years to be ranked.

Sarah D'Alelio is a female MMA who now fights for Invicta. She fights at Bantamweight and faces a stiff test against the 6-0 Lauren Taylor. She is a submission specialist with 5 of her wins coming that way. Her nickname is " Monster" and she is 32 years old and in the prime of her career. She lost back to back fights vs Rhonda Rousey and Julie Kedzie. The fight with Rousey ended very fast because Rhonda told Steve Mazzagatti that Sarah made a painful cry and the match was called by technical submission. The rules state if any opponent makes a painful cry that it would be considered a verbal submission. There really was no controversy because after the fight Sarah admitted she made the noise. She lost a decision to Kedzie.  She has won three of last four fights in Invicta and will go for her 4th win in Invicta FC 6 coming up on July 13. Her lone loss was to Shayna" The Queen of Spades" Baszler by submission. With a win  over the undefeated Taylor she might even get a chance to fight in the UFC. She will have 11 fights in a little less than 3 and 1/2 years.