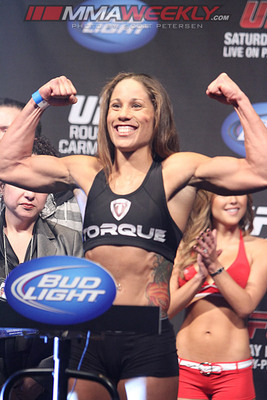 Fighting for a major organization has made Liz Carmouche ineligible for regional rankings.

Liz Carmouche is a bantamweight fighter currently signed to the UFC's womens division. She is a yellow belt in Kenpo karate and a blue belt in Brazillian Jui Jitsu. She trains out of San Diego, California. She was born in Lafayette, Louisiana but raised on a military base in Okinawa,  Japan. She is a veteran of the US Marine Corp where she was a helicopter electrician and served three tours of duty in the Middle East. She is notable in the UFC for being the first openly gay athlete and for taking part in the first womens fight in the companies history when she took on Rhonda Rousey at UFC 157. Of her nine wins, eight have been finishes including six T/KOs.

Carmouche entered the US Marine Corp in 2004 and became an electrician for helicopters. During her time with the military, she served three tours of duty in the Middle East. When she retired from the Marines, she began training for MMA in order to stay active.

Liz began her professional career in 2010, rattling off six straight wins in eight months. This earned her a shot at Marloes Coenen's Strikeforce Bantamweight belt. Liz would have her first professional loss when Coenen secured a triangle choke in the fourth round. She would again suffer defeat, this time by decision, when she was matched up with Sarah Kaufman in her final fight with Strikeforce.

"Girl-Rilla" was one of the fighters selected to be apart of the all female promotion, Invicta FC. She would take part in each of the promotion's first two events, earning stoppage victories over Ashleigh Curry and Kaitlin Young. In late 2012, it was announced Liz would be the first opponent for Ronda Rousey in the UFC, making her a participant of the first womens UFC fight ever. They were set to square off February 23rd, 2013 at the Honda Events Center in Anaheim California, headlining UFC 157 in what is arguably the biggest fight in women's MMA history. Carmouche started off good and was able to take Ronda's back and attempt a standing rear naked choke, however Rousey was able to shake her off and ended up on top where she was eventually able to sink in the armbar to finish Liz off in the first round with only eleven seconds remaining. Liz would earn her first victory for the UFC when she finished off Jessica Andrade at UFC on FOX 8 with punches in the second round. She next took on Alexis Davis in the co main event of UFC: Fight for the Troops 3 bu would end up on the short end of a unanimous decision.

Watch this special feature on Liz Carmouche as she discusses balancing training with other responsibilities.