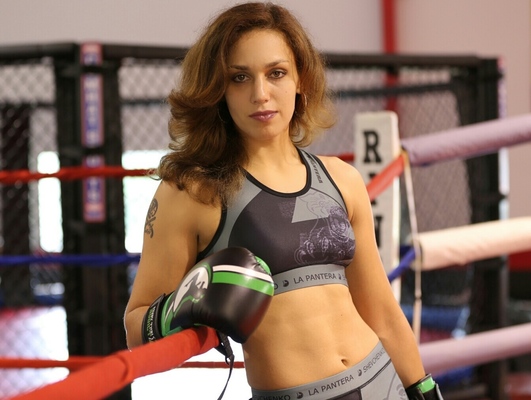 Fighting for a major organization has made Antonina Shevchenko ineligible for regional rankings.

Antonina Shevchenko made her MMA debut in 2002 and compiled a 3–0 record before taking a twelve-year hiatus from the sport. In 2017, she returned to MMA, building her record to 7-1.
Shevchenko next competed on the second season of Dana White's Tuesday Night Contender Series, where fighters compete for the chance of being awarded a contract with the UFC. She was scheduled to face Silvana Juarez at Dana White's Tuesday Night Contender Series 11 on June 26, 2018, however, 8 days before the fight it was announced that Juarez was forced out of the bout with an undisclosed injury. As a result, she was replaced by Jaimelene Nievera. Shevchenko won the fight via TKO in the second round after delivering multiple unanswered knees from the clinch. Her win earned her a contract with the UFC.
Shevchenko was expected to make her promotional debut against Ashlee Evans-Smith on November 30, 2018 at The Ultimate Fighter 28 Finale. However, it was reported on 8 November 2018 that Evans-Smith pulled out of the event due to injury and she was replaced by Ji Yeon Kim. At the weigh-ins, Ji Yeon Kim weighed in at 130.5 pounds, 4.5 pounds over the flyweight non-title fight limit of 126. She was fined 20 percent of her purse, which went to her opponent Shevchenko. The bout proceeded at catchweight. She won the fight via unanimous decision. Shevchenko faced Roxanne Modafferi on April 20, 2019 at UFC on ESPN+ 7. She lost the fight via split decision. Shevchenko faced Lucie Pudilová on August 3, 2019 at UFC on ESPN 5. She won the fight via technical submission due to a rear-naked choke in the second round. The win also earned her the Fight of the Night bonus award. Shevchenko was scheduled to face Cynthia Calvillo on April 25, 2020 at UFC Fight Night 173. However, on April 9, Dana White, the president of UFC announced that this event was postponed to a future date Instead, Shevchenko is scheduled to face Katlyn Chookagian on May 30, 2020 at UFC Fight Night 176.