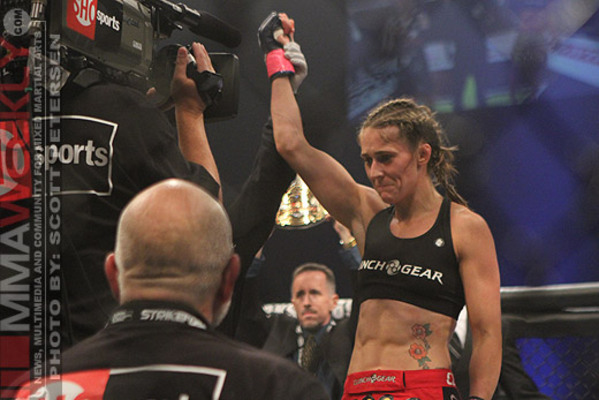 Marloes Coenen is ineligible for regional rankings due to inactivity.
Fighters must have at least one completed MMA bout in the past two years to be ranked.

Once dubbed 'The Golden Girl of Golden Glory' by Strikeforce commentator Mauro Ranallo, veteran Marloes Coenen could be argued as one of the most well rounded female fighters around today. A professional competitor since the year 2000, Coenen employs a style that includes a Dutch kickboxing element, as well as an always deadly ground game. She spent her pre-Strikeforce career mainly fighting in Japan, fighting other female standouts such as Erin Toughill and Roxanne Modafferi.

Coenen made her Strikeforce debut in a rematch against Roxanne Modafferi (she lost the first fight by split decision). She would avenge this loss by submitting Modafferi with a quick armbar. She then challenged Cristiane 'Cyborg' Santos for the Strikeforce Women's Featherweight crown, losing by third round TKO, prompting a drop to bantamweight. Her first fight at her new weight class would be to challenge then champ Sarah Kaufman for her bantamweight title. Despite being a slight underdog, Coenen forced Kaufman to submit with an armbar in the third round. She would then defend the title against Liz Carmouche, who possessed an undefeated record at the time. Coenen faced adversity in the bout, spending most of the first three rounds on her back. She was also mounted by Carmouche for a good majority of rounds one through three. But in a comeback that would bring back memories of Anderson Silva's against Chael Sonnen, Coenen would lock in a triangle choke in the fourth round, finishing the fight. She would fall short in a back and forth battle with Miesha Tate in her next title defense, losing by submission in the fourth round (it was also her first loss by submission).

Today, Coenen is contracted to upstart, all female MMA promotion Invicta FC. She defeated Romy Ruyssen in her debut, winning a decision. Her next move is unclear, but Coenen will always be looked at as a challenge for any female fighter at 135 pounds.