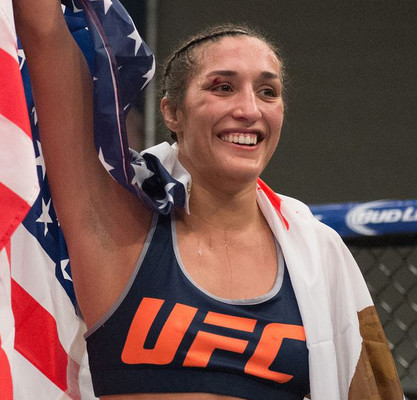 Tatiana Suarez is ineligible for regional rankings due to inactivity.
Fighters must have at least one completed MMA bout in the past two years to be ranked.

Tatiana Suarez is wrestling based fighter who went 6-0 and then faced former strawweight champion carla esparza on UFC 228. Suarez dominated esparza the whole fight with her superior wrestling and won in the third round via ground and pound. After the fight stats were revealed the win was made all the more impressive by the fact that esparza didn't even land a single punch.

Tatiana Suarez (born December 19, 1990) is an American professional mixed martial artist who competes in the Ultimate Fighting Championship (UFC) with a background in wrestling. She was the strawweight tournament winner in the 23rd season of The Ultimate Fighter reality show. As of February 17, 2020, she is #3 in the UFC women's strawweight rankings and #7 in UFC women's pound-for-pound rankings.