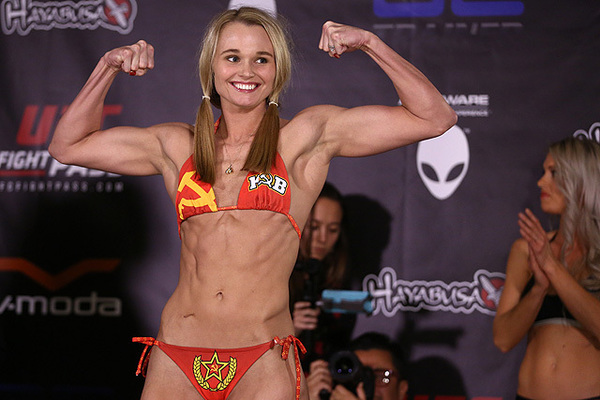 Fighting for a major organization has made Andrea Lee ineligible for regional rankings.

Andrea Lee affectionately known as "KGB" Lee due to her Eastern European looks and toughness, was born in 1989 to Cheryl and Kent Lee  of Atlanta, Tx. She attended and graduated from Queen City High School where she competed in powerlifting and Volleyball. After high school she moved to Bossier City, La and took a job as a waitress at a local sports bar. Through their showings of MMA events Andrea developed a strong interest in Martial Arts. With encouragement from friends, she decided to seek out a trainer and almost instantly Andrea saw that a career in Mma and Muay Thai was the obvious choice for the direction she was seeking in her life and KGB was born.

After 6 years of training, Andrea has amassed one of the most accomplished combat sports career of any female fighter in the world with a combined combat sports record of 36-6. She is a three Time amateur world Muay Thai champ, a two time North American champ and has countless MMA titles. Andrea is also a National Golden Gloves Boxing Champ. She now fights for the elite Women's MMA promotion, Invicta FC and simultaneously pursues a professional kickboxing And Muay Thai career.

In 2014 she was named amateur of the year,  The WMMA press awards "newcomer" of the year and also was the recipient of the Julie Kedzie " most exciting fighter" award. Andrea is one of the fastest rising flyweights in the world and after suffering a ruptured eardrum just days prior to her split decision loss to Roxanne Modiferi in Dec of 2014, she came back strong post surgery.  First by winning a unanimous decision for Legacy Kickboxing against No 10 world ranked Lindsey Marino. She then went on to defeat Hawaiian standout Rachael Ostovich by Armbar and On Dec 4, 2015 KGB defeated Ariel Beck, also by Armbar submission, to win the Legacy FC World Flyweight title in what many were heralding as womens fight of the year.

No doubt we should expect to see KGB fight for the coveted Invicta FC Flyweight title sometime in 2016 Andrea KGB Lee is 26 and married to her coach himself a former world Kickboxing Champion. Together they have 1 daughter. 2016 was a disappointing year for KGB. Her only fight was a submission loss after which she received a 9 mo administrative suspension for a banned diuretic.  During her suspension, KGB competed in the professional grappling circuit and finished the year undefeated. Expect to see marked improvements in her ground game heading into the rest of 2017.  After coming off a stellar 2015, but missing most of '16, KGB entered the cage in

2017 with a vindictive rage and a point to prove.  She started the year off with a 74 second knockout of invicta FC veteran Jenny Liou. KGB then went on to win the inaugural LFA World Flyweight title with a 3 rd Armbar submission. This makes her now a two time professional MMA World Champion and puts her in an excellent position to Challenge for Invicta FC's coveted crown later this year providing she can keep the streak alive. Will KGB become the face of the flyweight division this year?  After a stellar 2017, KGB ended the year 4-0 (1 ko 2 sub 1 dec ) while earning a second win in Invicta this year, KGB captured  the inaugural LFA title and made 1 title defense   defense. KGB was quickly scooped up by the UFC singling a multi fight deal. Expect her UFC debut around April.