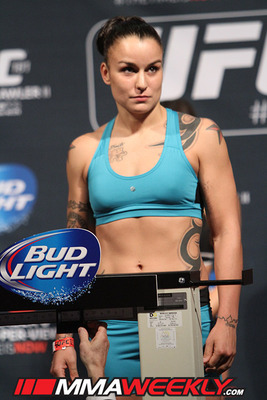 Fighting for a major organization has made Raquel Pennington ineligible for regional rankings.

Raquel Pennington was a competitor on TUF 18. She won her fight to get into the house against Tonya Evinger via 2nd round guillotine choke. In episode 6 of TUF Raquel faced Jessamyn Duke. The fight was a close slug fest with Duke winning with her range in the first round, and Pennington figuring out her range to win the second and third rounds and take the match. Pennington and Duke would both take home a $25,000 bonus for their fight of the season.

On the final episode of TUF 18 Raquel faced Jessica Rakoczy to see who makes it to the finals. The first round was close on the feet due to both being tentative because of injuries. Raquel got a take down late in the 1st to score points. The second round Jessica fought with more urgency and scored lots of points with jabs and combos. The third round looked a lot like the second with Jessica outclassing Raquel on the feet but she gave up a late take down this time. The fight was ruled a UD victory for Jessica.

Pennington would still fight on the Ultimate Fighter finale and would pick up her first UFC win over veteran Roxanne Modafferi. She fought Jessica Andrade at UFC 171, but would come up short in a split decision loss.

On December 6, 2014, at UFC 181, Pennington fought Ashlee Evans-Smith. It was a close Round 1 with Evans-Smith, but in the dying moments of the round, Pennington secured a bulldog choke. After the bell rang, ending Round 1 it was shown that the choke actual rendered Evans-Smith unconscious. The fight was called in between the rounds, however the official result is shown at Pennington winning it at 4:59. This was the second bulldog choke submission performed in the UFC; the first being when Carlos Newton submitted Pat Miletich at UFC 31 - back in 2001.

In Raquel's next fight on February 28, 2015 at UFC 184, Raquel faced the heavily hyped and undefeated Holly Holm in the Co-Main Event with Ronda Rousey defending her UFC Women's Bantamweight Championship against Cat Zingano in the Main Event.  This marked the first time in MMA history that a women's bout, with no belt on the line, was the Co-Main Event on a Pay Per View broadcast.  Holly Holm was in control for much of the match, though Pennington did come on strong in the final round in what ended as a Split Decision Loss for Raquel.  This evened up her official UFC record at 2-2, though both losses have come by Split Decision.