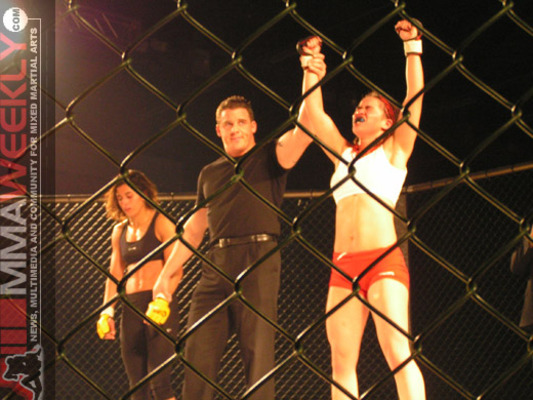 Rosi Sexton is ineligible for regional rankings due to inactivity.
Fighters must have at least one completed MMA bout in the past two years to be ranked.

Rosemary Ann Sexton is a British mixed martial artist currently competing in the bantamweight division. She is also a sports therapist, osteopath and writer for Fighters Only magazine. Sexton was involved in an infamous match with Tomomi Sunaba for BodogFight, unintentionally causing a serious injury.

Rosi Sexton was born in France but moved to Britain at a young age and grew up and received her education in the United Kingdom. She attended Kendrick School, Reading and Trinity College, Cambridge where she took a first in mathematics (1998). She was awarded a PhD in Theoretical Computer Science by the University of Manchester (2003), following which she trained in osteopathy, receiving a degree in that subject from Oxford Brookes University in 2010. She currently practices as an osteopath in the Manchester area. Sexton has been involved in martial arts since schooldays, and has competitive experience in mixed martial arts and Brazilian Jiu-Jitsu, and holds dan grades in jujutsu and Tae Kwon Do.

Sexton made her mixed martial arts debut on May 11, 2002. She won her first five fights before moving up in weight to face Gina Carano on September 15, 2006. Sexton was defeated by knockout late in the second round. Sexton debuted for BodogFight on December 16, 2006 and upset Brazilian submission specialist Carina Damm with an armbar late in the first round. On February 17, 2007, Sexton faced Japanese striker Tomomi Sunaba at a BodogFight event in Costa Rica. Sexton won the fight by technical decision in the second round after Sunaba suffered a serious ankle injury. Sexton fought once more for BodogFight and submitted Julia Berezikova on August 24, 2007. Sexton signed an exclusive three-fight contract with Elite XC in June 2008. She faced Debi Purcell at the August 15, 2008 ShoXC event in Friant, California and defeated Purcell by split decision.

Following the demise of Elite XC, Sexton debuted for Bellator Fighting Championships at Bellator 12 on June 19, 2009. She submitted Valerie Coolbaugh with an armbar in the first round. Sexton was scheduled to face Angela Magana at CWFC 37: Right To Fight on May 22, 2010 but Magana suffered an injury and Sexton was matched against Emi Fujino. However, due to Sexton's re-signing with Bellator her CWFC fight was cancelled. Sexton faced Zoila Gurgel at Bellator 23 on June 24. She was defeated by knockout exactly two minutes into the first round. As a result of the knockout loss, Sexton was given a 60-day medical suspension and did not compete in the Bellator women's 115-pound tournament.

Sexton moved up in weight to make her UFC debut in Winnipeg, Manitoba, Canada on the UFC 161 card against Alexis Davis on June 15, 2013 but would end up losig via unanimous decision. She next fought Jessica Andrade at UFC Fight Night 30, but would again lose by decision, marking the first losing streak of her career.

It was reported the week of December 16th that after a brief 0-2 run, Sexton was released from the UFC.  It is unknown if Sexton will continue her fighting career, as she needs neck surgery to treat bulging discs.