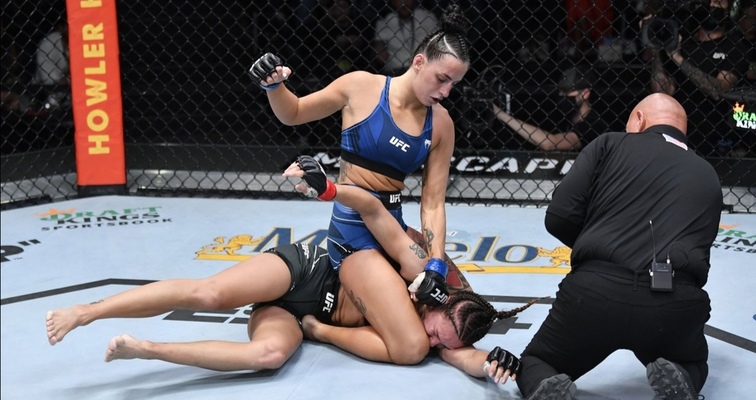 Fighting for a major organization has made Casey O'Neill ineligible for regional rankings.

Casey Cameron O'Neill was born in Irvine, Scotland and spent early childhood in Kilmarnock before her family moved to Australia at the age of ten. Her father was a professional kickboxer and O'Neill began training in kickboxing at eight years old. She began training jiu-jitsu at thirteen and is a brown belt in that discipline. Her parents were originally reluctant to let her train martial arts but warmed up to it as she grew older. Many students at O'Neill's high school wanted to fight her because they knew she trained martial arts.

O'Neill debuted in amateur MMA at the age of 15 and went 5-2, with five consecutive finish victories after an 0-2 start. O'Neill made her professional debut at Eternal MMA 43 in 2019 and won the Strawweight Championship. A 5-0 start to her career earned her a UFC contract and she debuted at UFC Fight Night: Blaydes v. Lewis. O'Neill is 4-0 in the UFC, having defeated Shana Dobson (Blaydes v Lewis) and Antonina Shevchenko (UFC Fight Night: Santos v Walker) via ground and pound KO/TKO, Lara Fritzen (UFC Fight Night: Korean Zombie v. Ige) via standing rear naked choke, and retiring Roxanne Modaferri (UFC 271: Adesanya v. Whittaker 2) via split decision.

O'Neill's nickname "King" comes from her early struggles in amateur mma. After an 0-2 start, O'Neill changed gyms and her new coach at Southside MMA told her not to give up and encouraged her to work on her game. O"Neill would drive 45 minutes to the gym after work to train for three hours. After a dominate win in her third ammy fight, O'Neill's coach commented "Damn, that was some king shit."