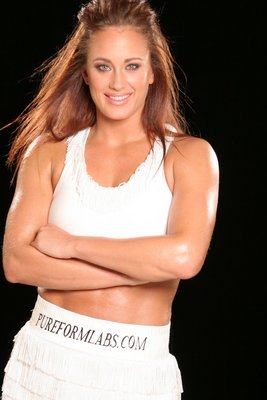 Jessica Rakoczy is ineligible for regional rankings due to inactivity.
Fighters must have at least one completed MMA bout in the past two years to be ranked.

She began boxing at age 20 and was considered for the Canadian national boxing team but a car accident prevented her from competing. Jessica made her pro debut on October 21, 2000 in with a first round knockout. She went 12-1 before capturing her first title the IBA Womens Lightweight Championship. She would go on to win 5 titles before making the switch to MMA in 2009.

Though she lost her first 3 fights she faced some stiff competition in Michelle Ould, Zoila Frausto and a split decision loss to Felice Herrig. Rakoczy would win her next fight against previously undefeated Jennifer Scott by TKO, though it was declared a no contest after she tested positive for painkillers.Rakoczy admitted that she had taken a Percocet pill after a sleepless night before the fight but did not inform doctors at the arena. She received a nine-month suspension of her MMA license for the infraction. Her next fight was nearly 2 years later, a first round KO of Kristen Gatz at Tachi Palace Fights 14.

On May 5, 2012, Jessica made her return to boxing and scored a convincing fourth-round TKO over Brittany Cruz. On January 24, 2013 she won a ten-round unananimous (99-90x3) decision over Ada Velez for the vacant WIBA Super Bantamweight title. She was named WBAN's Fighter of the Month for February 2013 in recognition of her win over Ada Velez.

Jessica was a contender on TUF 18 . She won her first fight to get into the house by beating Revelina Beto via 1st round omoplata. On Episode 4 of TUF Jessica faced the vet Roxanne Modafferi . The first round was close with Jessica winning on the feet and Roxanne winning on the ground. In the second round Roxanne came out with an empty gas tank and got hit with a bunch of punches from Jessica. The fight ended in the 2nd by TKO after Jessica took the rest of Roxanne's gas tank with a slam. Rakoczy would take home the $25,000 knockout of the season bonus for this finish.

On the final episode of TUF 18 Jessica faced Raquel Pennington to see who makes it to the finals. The first round was close on the feet due to both being tentative because of injuries. Raquel got a take down late in the 1st to score points. The second round Jessica fought with more urgency and scored lots of points with jabs and combos. The third round looked a lot like the second with Jessica outclassing Raquel on the feet but she gave up a late take down this time. The fight was ruled a UD victory for Jessica and she moved on to fight Julianna Pena for the TUF 18 championship.