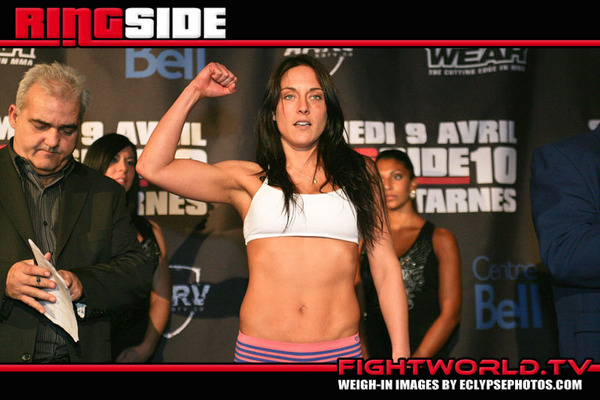 Valérie Létourneau is ineligible for regional rankings due to inactivity.
Fighters must have at least one completed MMA bout in the past two years to be ranked.

Valerie Létourneau was a competitor on TUF 18 . She lost her fight to get into the house against Roxanne Modafferi via 1st round rear-naked choke.

Valérie Létourneau (born April 29, 1983) is a Canadian mixed martial artist who competes in the Women's Flyweight division for Bellator MMA. As of July 31, 2017 Fight Matrix ranks her #26 female MMA strawweight in the world.

Létourneau made her MMA debut March 31, 2007 with TKO win over Tannaya Hantelman. Létourneau then lost her next two fights to future UFC Women's Bantamweights Sarah Kaufman & Alexis Davis. Létourneau broke her hand in the first round of her fight with Davis. After Létourneau rebounded by winning her next three fights she then set to face future UFC Women's Strawweight Cláudia Gadelha at Wreck MMA: Road to Glory. She lost via split decision. Létourneau returned at AFC 21 finishing off Jordan Moore in 34 seconds via TKO.

Létourneau made her UFC debut at UFC 174 taking on Elizabeth Phillips, who was filling in for the injured Milana Dudieva. Létourneau won the fight via split decision.

On April 24, 2017, Létourneau signed a new contract with Bellator MMA. The deal enabled her to fight at a weight of 125 pounds, an easier weight cut than the 115 pound weight limit required for the UFC's strawweight division. Létourneau was expected to debut against Emily Ducote at Bellator 181 on July 14, 2017. However, on July 10, she pulled out of the bout due to injury. Létourneau eventually made her debut against Kate Jackson at Bellator 191 on December 15, 2017. She won the fight by unanimous decision. Letourneau then faced Kristina Williams at Bellator 201, earning the a unanimous decision victory. Letourneau faced Ilima-Lei Macfarlane at Bellator 213 for the Bellator Women's Flyweight World Championship. She was defeated by third round submission.