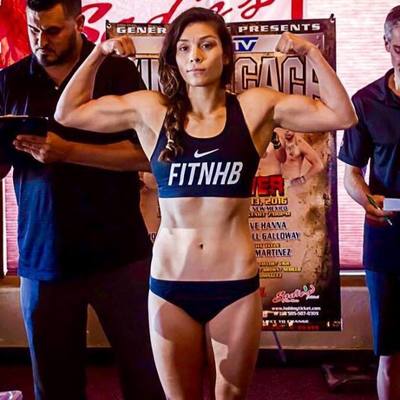 Nicco Montaño is ineligible for regional rankings due to inactivity.
Fighters must have at least one completed MMA bout in the past two years to be ranked.

Nicco Montaño (born December 16, 1988) is an American mixed martial artist who competes in the flyweight division of the Ultimate Fighting Championship. She was the inaugural UFC Women's Flyweight Champion. As May 19, 2020, she is #15 in the UFC women's flyweight rankings. Of Navajo, Chickasaw, and Hispanic descent, Montaño was born in Lukachukai, Arizona. She graduated from Chinle High School in 2006 then she attended Arizona State University, in Tempe, AZ before transferring to Diné College in Tsaile, AZ, and finally ending up at Fort Lewis College in Durango, Colorado. It was there, in Durango she signed up at Durango Martial Arts Academy and ignited her passion for martial arts. Montaño began training in boxing at an early age. She eventually took up jiu-jitsu before becoming an MMA fighter in 2013. After an amateur career that saw her produce a record of 5-0, Montaño made her professional mixed martial arts debut in November 2015. Competing primarily for King of the Cage, where she won the KOTC Women's Flyweight Championship, Montaño compiled a record of 3–2 before joining the cast of The Ultimate Fighter 26 in mid 2017. In August 2017, it was announced that Montaño was one of the fighters selected to be on The Ultimate Fighter: A New World Champion. In her first fight on the show, Montaño faced UFC veteran Lauren Murphy. She won the fight via unanimous decision after two rounds. In the quarterfinals, Montaño faced off against Montana Stewart. She won the fight via unanimous decision after two rounds. In the semifinals, Montaño faced former Invicta FC Flyweight Champion Barb Honchak. She won the fight via unanimous decision after three rounds.
Montaño was expected to fight Sijara Eubanks for the inaugural UFC Women's Flyweight Championship at The Ultimate Fighter 26 Finale on December 1, 2017. However, Eubanks was pulled from the fight for kidney failure while trying to make weight, and was replaced by Roxanne Modafferi. Montaño won the fight via unanimous decision and claimed the inaugural UFC Women's Flyweight Championship title. This win also earned her the Fight of the Night bonus. Montaño was scheduled to face Valentina Shevchenko on September 8, 2018 at UFC 228. However, prior to the weigh-ins for the event, Montaño was transported to a hospital due to the effects of weight cutting and the bout was cancelled. Montaño was subsequently stripped of the UFC Women Flyweight title. It was reported that on April 23, 2019, Montaño was suspended by USADA for 6 months for tested positive for ostarine from an out-of-competition test conducted on October 25, 2018. Suspension retroactive from November 15, 2018. She is eligible to fight again in May 15, 2019. Montaño was expected to face Sara McMann in a bantamweight bout on July 13, 2019 at UFC on ESPN+ 13. However, McMann pulled out of the bout citing an injury and was replaced by Julianna Peña. She lost the fight via unanimous decision. Montaño was scheduled to face Macy Chiasson on February 15, 2020 at UFC Fight Night 167. However, Montaño was forced to pull from the event due to injury and she was replaced by Shanna Young. Nicco is scheduled to face Julia Avila on August 8, 2020 at UFC Fight Night 176