"The Queen of Spades" 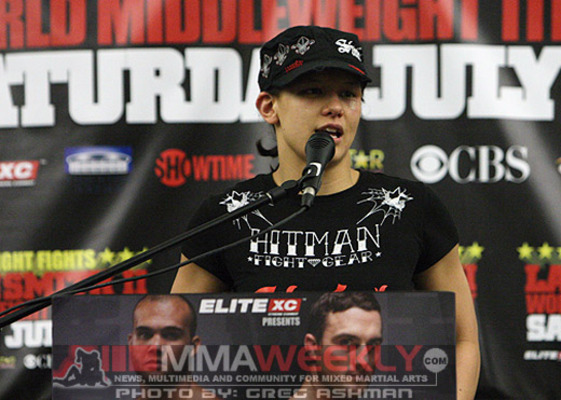 Shayna Baszler is ineligible for regional rankings due to inactivity.
Fighters must have at least one completed MMA bout in the past two years to be ranked.

Shayna Baszler is a female MMA fighter, born and raise Sioux-Falls. She met Josh Barnett who taught her catch wrestling by syllabus. "The Queen of Spades" is known for her "Chicken wing" submission, a one arm Kimura from the guard and called it the "Shwing", she used it to defeat Roxanne Modafferi. She is also the only female fighter to ever win by "Twister" submission.


She is 15-7 record with 14 wins by submissions. Defeated by Cristiane Justino, Tara LaRosa, Sarah Kaufman, she now signed at Invicta FC, where she lost against Sarah McMann via decision, and won via RNC in the second round against Sarah D'Alelio. Baszler's next fight would come against Canadian standout Alexis Davis at Invicta FC 4. She would lose the bout via rear near choke in the 3rd round.

Shayna was a competitor on TUF 18. She won her fight to get into the house against Colleen Schneider via 1st round armbar. On the second episode of TUF 18 Shayna faced Juliana Pena. The 1st round was won by Shayna with ground control. In the second round Pena dominated with knees and eventually submitted Baszler with a rear naked choke.

Baszler eventually made her UFC debut against Bethe Correria at UFC 177 on 30 August, 2014. She lost the fight via TKO in Round 2 at 1:56. She looks to get her first UFC win against Amanda Nunes at UFC Fight Night 62.