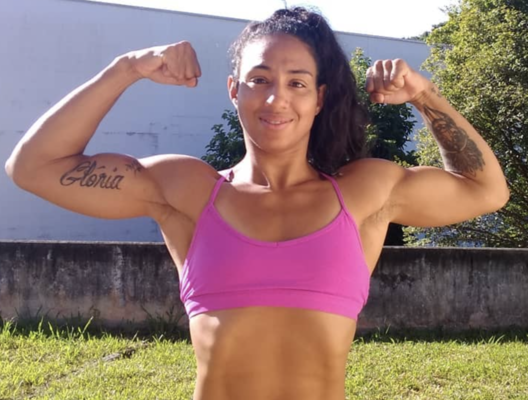 Fighting for a major organization has made Taila Santos ineligible for regional rankings.

Taila Jaime dos Santos was born June 22, 1993 in Jaraguá do Sul, State of Santa Catarina, Brazil. She is a Brazilian mixed martial artist who competes in the Flyweight division of the Ultimate Fighting Championship. As of March 29, 2022, she is #4 in the UFC women's flyweight rankings.

With her father being a Muay Thai coach, she started training it at the age of 16, soon afterwards being enrolled in a championship at Chute Boxe of Curitiba, which Taila went to win. Taila started to train Jiu-Jitsu, with her father organizing an MMA fight so that Taila could debut in the sport. She went and won again. Afterwards, her father contacted Marcelo Brigadeiro to organize the trip to Astra Fight, in Balneário Camboriú, where she lived until september 2021, when she moved to Thai Brasil Floripa in Florianópolis.

After going the distance in her 2013 pro debut, she would go on to finish her next 10 bouts in the first round. In 2016, her one appearance came against Laisa Coimbra for the Aspera FC Bantamweight Championship. She won the title with an 87-second knockout — via a punch to the body.

After two year layoff, she was invited onto Dana White's Contender Series Brazil 2 where she faced off at Flyweight against Estefani Almeida. She won the unanimous decision and earned a UFC contract.

Santos faced Roxanne Modafferi in a flyweight bout on September 25, 2021 at UFC 266. She won the fight via unanimous decision.
Santos faced Joanne Wood on November 20, 2021 at UFC Fight Night 198. After knocking Wood down twice, Santos won the bout via rear-naked choke at the end of the first round. This fight earned her the Performance of the Night award.

Santos is scheduled to face Valentina Shevchenko for the UFC Women's Flyweight Championship on June 11, 2022, at UFC 275.