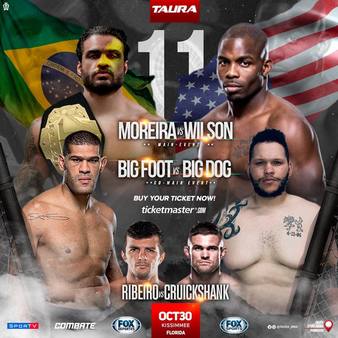 I saw Brett Vs Renan. He’s super fat. Soft as hell & belongs at 185. But he’s like athletic fat. Like if u took a guy that’s actually good and just had him eat a box of twinkles twice a day for 6 months. When he starts getting hit he also looks like he wants out. But having said that... he hits hard. Very hard. And Bigfoots head is very very hard to miss.
Not only is he slow as all **** but his head looks like it should be attacked to a giant tree sloth back in the Pleistocene epoch.
The real Bigfoot if he exists is the last surviving member of the giant sloth species so it’s an apt moniker.
Perhaps strangely he also can’t take a punch. One would expect a skull that’s inches thick would offer good insulation but it seems like it’s just not so. His heads so huge that his brain has space to bounce around in there when he’s hit I guess.
Having said that if bigfoot can complete a takedown early then it should be over. He is a very experienced ground fighter and laying under him is something I think we’d all prefer not experience.
Why he’s fighting at 265 I can’t say.
If he needs money he should roid back up to 350 and do the freak show circuit in the Far East. He said years ago that he can’t produce testosterone very well cause health issues and now he’s pushing 40. Now maybe he did do some juice this time but he’s weight worries me.
We will know at the weighin

Silva vs. Martin
Antônio Silva, TKO, R1
Hope this ******* can take a punch from this chubby man

Silva vs. Martin
Brett Martin, TKO, R1
Silva should have retired like 5 years ago. This is getting ****** up and sad. I hope he wins this fight just because it's depressing watching him get knocked out over and over. Martin has won his last 2 fights by DQ so maybe there's a chance but I really doubt it.

Santos vs. ****man
Paulo Sergio Santos, TKO, R1
I don't trust anyone coming off a 3 year layoff and 2 losses.

Caballero vs. Smith
Josh Smith, DEC
I think That Guy is gonna win

Tapology members can make predictions for upcoming MMA & Boxing fights. Taura MMA 11 is closed for new predictions. 116 total members made predictions on this event, breaking down as follows below.

Leaderboard of the best predictions by member: Taura MMA 11 Leaderboard