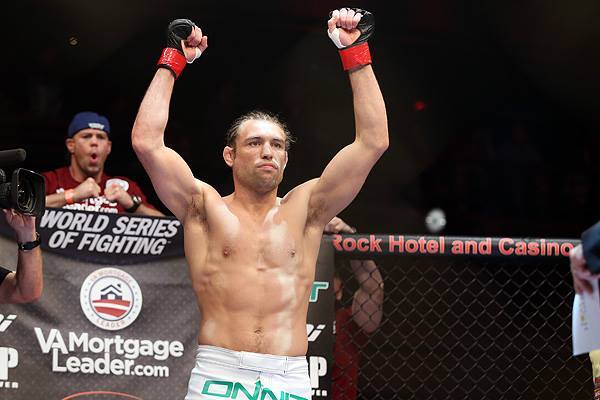 Steve Carl is ineligible for regional rankings due to inactivity.
Fighters must have at least one completed MMA bout in the past two years to be ranked.

Steve Carl is an American Mixed Martial Artist fighting out Team Hard Drive in Cedar Rapids, Iowa. Carl was a successful wrestler in High School, qualifying for the state championships and won a sectional championship in 2003. Shortly after joined The United States Army, where he began training in Army Combatives. He fought amateur there until turning pro in 2005.

Carl won his debut, submitting Andrew Perkins on strikes. He went 5-0  before suffering his first loss to UFC veteran Brian Foster, getting TKO'd in the 1st round. He would rattle off 7 wins in a row after the deafeat bringing his record to 12-1. Carl was then signed on to compete in Bellator Fighting Championships 2nd Welterweight Tournament. He defeated Brett Cooper by split decision in the quarterfinals, then was submitted by Dan Hornbuckle in the semi final round. In his next bout, he choked out tough veteran Tyler Stinson to earn a spot in the next WW tourney only to lose by decision to eventual winner Douglas Lima in the quarterfinals. This was his last fight for Bellator.

After his Bellator stint, Carl fought 4 more times before being signed by upstart promotion World Series of Fighting and took on former Olympic wrestler Ramico Blackmon. Carl choked out Blackmon early in the first round, looking very sharp. In his next fight, he faced up-and comer Tyson Steele in a "title eliminator" fight. Carl would again make short work of his opponent, choking out steele in just over a minute, proving his superiority on the mat. This win would earn him a shot at the first ever World Series of Fighting Welterweight Championship against former UFC and TUF veteran Josh Burkman. The fight between the two was grueling to say least, with both virtually even by the end of the 3rd round in a back in forth war on the ground. Much of the same to start the fourth, but aftera mistake by Burkman, Carl was able to latch on a nasty Triangle Choke, putting Burkman to sleep and earning him his title. There was some controversy that Burkman had actually tapped before going unconscious. Carl seems to have found his home at WSOF, now awaiting the chance to defend his new belt.

That chance would come in the form of Rousimar Palhares at WSOF 9. The fight immediately went to the ground and it wasn't long before Carl became another victim of Palhares signature move. He had to tap out in the first round once Palhares sunk in the heel hook.

Following his loss to Palhares, Carl would take a break from fighting. After talks with WSOF president Ray Sefo, Carl requested and was granted his release from the promotion. During the UFC's "Welcome to the Show" press conference, it was announced that the 21st installment of the Ultimate Fighter would feature the rival camps of American Top Team and the Blackzillians would face each other in the welterweight division. Carl was selected to take part in this upcoming season.  In episode 3, Carl was selected by the American Top Team to stop their losing streak.  Carl, considered a leader of the team and a favorite to win the entire competition was defeated in his first fight in the competition by fellow WSOF and Bellator veteran Valdir Araujo, giving ATT their third consecutive loss on the show.  After securing the first finalist on the show in Hayder Hassan, ATT decided to bring Steve Carl back for the following fight.  He was matched up against the Blackzilian prospect Kamaru Usman.   Carl was once again defeated, this time by unanimous decision.  After being a favorite to win the entire competition and going 0-2 instead, Carl went on the record to state that both of his bouts on TUF were the worst in his entire career and speculated that it was either the television show atmosphere or the pressure to fight for his losing team that contributed to his poor performance.