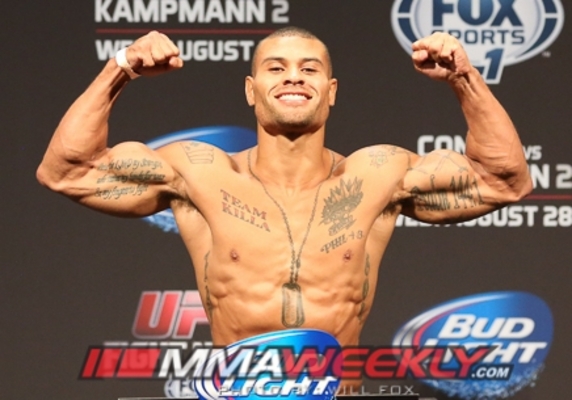 Abel Trujillo is ineligible for regional rankings due to inactivity.
Fighters must have at least one completed MMA bout in the past two years to be ranked.

Abel Trujillo was born on July 18, 1983 in Greensboro, NC and made his mixed martial arts professional debut in 2009.

After stringing together a win streak and bringing his pro record to 9-4, Trujillo was signed by the UFC and was scheduled to face Tim Means in a lightweight bout at UFC on Fox 5: Henderson vs Diaz. However, Means suffered a head injury the day before the bout was scheduled to take place and was replaced by UFC vet Marcus LeVesseur. After stuffing several takedowns from LeVesseur, Trujillo delivered several knees to LeVesseur's body and earned a 2nd round TKO stoppage.

Trujillo's second UFC outing would result in a decision loss to Khabib Nurmagomedov at UFC 160, in a fight where he was unable to stop the throws and takedowns of Nurmagomedov.

His next fight would be against Strikeforce import, Roger Bowling. After some back and forth action in the 1st and most of the second round, Trujillo accidentally hit Bowling with an illegal knee to the head while Bowling was ruled a grounded opponent. However, UFC President Dana White believed that Trujillo's knee strike did not hit Bowling's head, and Trujillo was paid his win bonus regardless of the official ruling.

The rematch with Bowling took place at UFC on FOX 9 in December 2014. Trujillo relentlessly mauled his opponent including a perfectly timed knee to the body when Bowling was grounded against the fence ultimately winning the fight via a TKO in the second round when Big John McCarthy stepped in to save the still standing, but dazed and nearly unconscious Bowling. Abel would follow that up with another win this time over former WEC champ Jamie Varner. Abel would finish him off in the second round putting him to sleep and earning Knockout of the Night as well as the Fight of the Night bonus.