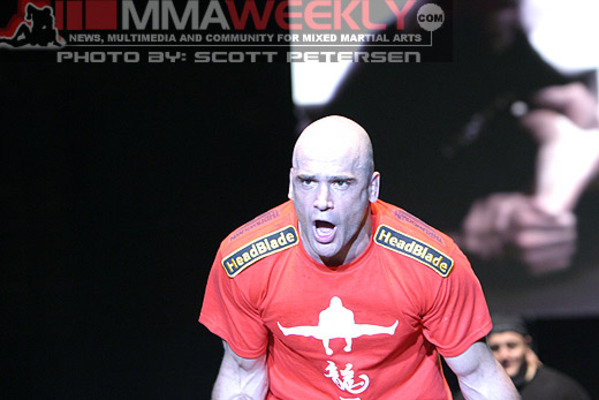 Bas Rutten is ineligible for regional rankings due to inactivity.
Fighters must have at least one completed MMA bout in the past two years to be ranked.

Dutch striking legend Bas Rutten began fighting professionally in the rough-and-tumble early years of MMA, defeating notable contemporaries such as Frank Shamrock (twice), Guy Mezger, and Kevin Randleman in his decorated 13-year career. Rutten won the UFC Heavyweight Championship in a 1999 battle with Randleman, but the majority of his career was spent fighting overseas in the Pancrase organization, where he won the King of Pancrase title in 1995. Rutten would return to the States for one last fight in 2006 after retiring from the sport for seven years, but cumulative injuries suffered in training, including two torn biceps and a blown out knee, prompted his permanent retirement.

Known for his tremendous technical knowledge, high fitness level and powerful striking style, Rutten began his professional fighting career in Muay Thai, reportedly winning his first 14 fights all by first round knockout. Though he became increasingly well-versed in submissions as his career developed, ultimately winning 13 of his professional fights by tapout, Rutten was first and foremost regarded as one of the dominant strikers of his time, with a penchant for delivering brutal liver shots and crippling leg kicks.

“El Guapo’s” fame has increased dramatically since his fighting days, as his colorful and outgoing personality made him a regular on various MMA announcing and promotional platforms. Rutten is remembered as the color commentator for the early events of the Pride FC organization who, alongside “The Fight Professor” Stephen Quadros, made for a wacky but highly knowledgeable tandem that many recall with fondness. Rutten has also announced live events on HDNet, hosted HDNet’s weekly “Inside MMA” television show with Kenny Rice, and appeared in films and documentaries about the sport, including acclaimed HBO documentary “The Smashing Machine.” He remains a fan favorite and a leading personality in the world of mixed martial arts.

Bas Rutten was a long time sufferer of Asthma as a child along with a skin disease that caused him to be in great discomfort as a child. In 1976 at the age of 12 Bas became greatly inspired with Martial Arts after seeing the Bruce Lee blockbuster "Enter the Dragon". Then after a few years of taking Taekwondo  he realized that he had a knack for striking. After studying more styles of Martial Arts including Karate, Kyokushin Karate, and Muay Thai.

After auditioning for the promotion of Pancrase he grew in popularity in the Japanese public with dynamic knockouts and submissions. In time Bas became the "King of Pancrase" in incredible 3 times. After his popularity rose in Japan he commentated in the Japanese organization of PRIDE Fighting Championships.  He earned the UFC title in 1999 after winning a split decision over Kevin Randleman. He could not defend the title do to injury and vacated his UFC belt.

He came out of a 7 year retirement in order to fight Rickson Gracie, due to money complications the fight was not legitimized, then a fight with Kimo Leopoldo was in the works and ready to go. But do to a failed drug test from Kimo, Bas fought the replacement in Ruben "Warpath" Villareal. After a 1st round TKO, Bas road off into the sunset as being one of greatest MMA personalities in the sport.

Bas Rutten gained the nickname "El Guapo" after having a dinner with Japanese officials during his PRIDE commentating days.

Bas Rutten is a certified Chef

Bas Rutten was offered a super fight deal under PRIDE FC against Wanderlei Silva, but do to Bas's past injuries Bas requested that the Match would be under K-1 kickboxing rules but with MMA gloves. It was denied and the Super Fight was not finalized.

Fight Magazine documentary video / interview with Bas Rutten, discussing one of his infamous bar fights and how he ended up in jail.

Fight Magazine documentary video / interview with Bas Rutten, discussing how Bas started fighting professionally and his story from being a bouncer at a bar.

Fight Magazine documentary video / interview with Bas Rutten, discussing how Bas may have fared in today's modern world of MMA.

Fight Magazine documentary video / interview with Bas Rutten, discussing his childhood and how he got started in martial arts.