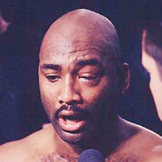 #68
Greatest MMA Striker of All Time

Maurice Smith is ineligible for regional rankings due to inactivity.
Fighters must have at least one completed MMA bout in the past two years to be ranked.

A professional kickboxing veteran who battled greats such as Ernesto Hoost during the prime of his career, Maurice Smith is a journeyman MMA fighter whose most notable achievement was winning the UFC Heavyweight Championship in 1997 with a losing (4-7) record heading into the fight.  Prior to that win, Smith had accrued notable losses to Ken Shamrock, Bas Rutten (twice), and Tsuyoshi Kohsaka. After retiring from the sport in 2000 after a loss to Renato “Babalu” Sobral at UFC 28, Smith returned to action in 2007 to defeat Marco Ruas and Rick Roufus, before retiring again the following year.

Smith was given the shot at the UFC title because he was the champ of Extreme Fighting. Mo was one of the first non-Brazilians to beat a BJJ Blackbelt(Conan Silviera) in MMA and he did that in Extreme Fighting.  He then fought and beat Murakami Kazunari and then the event folded.

Although he was a powerful striker in his prime, Smith demonstrated a complete lack of submission defense for most of his career, losing 10 of his 13 losses by submission.