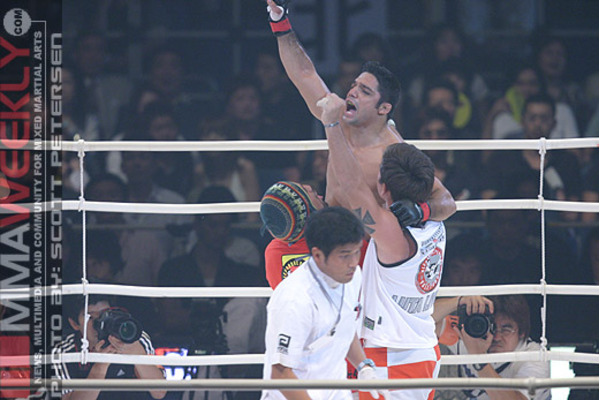 Alexandre Franca Nogueira is ineligible for regional rankings due to inactivity.
Fighters must have at least one completed MMA bout in the past two years to be ranked.

Alexandre Franca “Pequeno” Nogueira is a Brazilian mixed martial arts fighter born Rio de Janeiro, Brazil on January 15, 1978. Pequeno is most notably known for his success competing in the lightweight division of the Japanese organization Shooto.

Franca holds the record for the longest title reign in an MMA organization, holding the Shooto 143 lbs. title for 6 years, 8 months, and 2 days. After suffering a knee injury and being unable to defend the title in the mandatory time period, he was forced to vacate it.

After competing in Shooto for most of his career, Nogueira moved on to compete in HERO’S where he found very little success losing the majority of his fights there.

After his 2008 fight with Jose Aldo, Nogueira tested positive for boldenone and was suspended and fined by the CSAC.

After testing positive, Nogueira was inactive for over a year. He made his return at the Vale Tudo Japan 2009 event where he was stopped by "Lion" Takeshi Inoue by TKO due to punches in 2:58 of round 4.

After the loss to Lion Takeshi, Nogueira took a long rest perioud for almost 3 years where he was inactive as a mixed martial arts fights. Nogueira however mad his return on March 24, 2012 when he defeated Payaso Loco by submission due to strikes in 2:15 of the first at a Duelo de Titas show in Mato Grosso, Brazil.