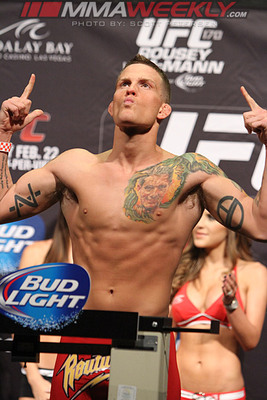 Fighting for a major organization has made Erik Koch ineligible for regional rankings.

Erik Koch is an American lightweight fighter currently signed to the UFC. He is a black belt in Tae Kwon Do and trains out of Roufusport Academy in Milwaukee, WI. He has previously fought for Mainstream MMA, Midwest Cage Championships, and World Extreme Cagefighting. He holds notable wins over Eric Wisely, Joe Pearson, TJ O'Brien, Francisco Rivera, Raphael Assuncao, Rafaello Oliveira, and Jonathan Brookins. His older brother, Keoni Koch, is also a professional MMA fighter. Of his fourteen professional wins, eleven have been finishes including seven submissions. He has won the WEC "Knockout of the Night" bonus one time and the UFC "Knockout of the Night" bonus one time.

Koch began taking Tae Kwon Do classes at the age of four and started practicing grappling and MMA striking before the age of fourteen with his brother, Keoni Koch. He would drop out of high school to pursue his goals as an MMA fighter. In 2006, he debuted as an amateur and would go 2-0 in three months. He would debut professionally the following year. Over thirteen months, he was able to compile a perfect 8-0 record including wins over future UFC fighters Eric Wiseky and TJ O'Brien while also picking up the Mainstream MMA Lightweight championship by triangle choke over journeyman, Joe Pearson. Koch also won the Midwest Cage Championship Featherweight Tournament which was a four man, one night tournament.

Erik then made his debut for the WEC by winning a unanimous decision before being handed his first loss by Chad Mendes. He would notch two more wins for the promotion including a knockout of Francisco Rivera which earned him "Knockout of the Night" honors.

In early 2011, Koch would be brough to the UFC when the WEC ceased operations. In his first fight with the promotion, he would receive another "Knockout of the Night" bonus when he finished Raphael Assuncao in the first round at UFC 128. His next win would be a decision victory over Ultimate Fighter winner Jonathan Brookins. Koch was set to take on Dustin Poirer at UFC 143, but an injury sidelined him. He was also lined up to fight Jose Aldo for the title, but the fight was rescheduled after Aldo was hurt but then Koch himself was injured and the bout was cancelled. He would next take a fight with Ricardo Lamas which was supposed to occur at UFC 155, however, the fight was moved to the UFC on FOX 6 card. He would lose the fight via second round TKO, giving Koch his first UFC loss and snapping a four fight winning streak. He would lose consecutive fights for the first time in his career when he was defeated by Dustin Poirier at UFC 164. He was almost able to finish the fight with a triangle choke attempt in the first round but ended up losing the fight by decision.

In early 2014, Erik decided to move back up to lightweight, a division he had not competed in since 2008. He took on Rafaello Oliveira at UFC 170 and was quickly able to put his opponent away with strikes in the first round.

Vinicius de Jesus is 31 today! Send him a Tweet.