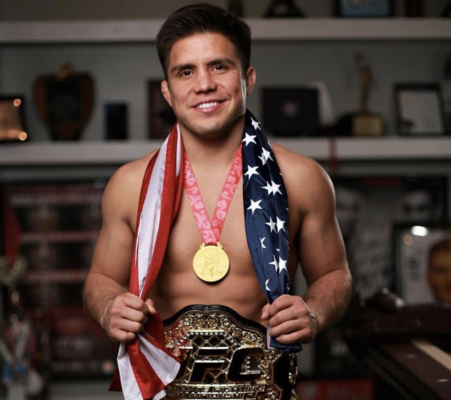 Henry Cejudo is ineligible for regional rankings due to inactivity.
Fighters must have at least one completed MMA bout in the past two years to be ranked.

Henry Carlos Cejudo is an American retired mixed martial artist and freestyle wrestler. He was signed to the Ultimate Fighting Championship and is the former UFC Flyweight Champion and UFC Bantamweight Champion.

Coming up, Henry Cejudo was hoping to make big waves in the MMA world. The 2008 Olympic gold medalist is the youngest American wrestler to win a gold medal, and is hoping to earn similar results in MMA. Not to be mistaken for a one trick pony, Cejudo recently won a Copper Gloves tournament in Arizona, having four amateur boxing matches on his resume in addition to his stellar amateur wrestling career.

Despite earning gold at 121lbs, Henry would make his MMA debut in the bantamweight division (135 lbs). His first opponent was Mike Poe. Cejudo won by submission due to strikes in the first round. He would pick up 5 more wins before signing with the UFC. Cejudo hoped to compete at flyweight (125 lbs) in the UFC, but after an infamous botched weight-cut vs Scott Jorgensen at UFC 177 that resulted in the cancellation of the fight, UFC president Dana White banned him from the flyweight division.

Cejudo would bounce back with a dominant decision win over Dustin Kimura at UFC on FOX 13 in the bantamweight division. After the fight, Cejudo expressed interest in giving 125 lbs another try. The UFC was willing to oblige and matched him up with Chris Cariaso at UFC 185 at flyweight. He would look impressive en route to a unanimous decision victory. Then would face Chico Camus at UFC 188, winning via unanimous decision. For his next fight against Jussier Formiga on November 21, 2015 at UFC Fight Night 78. Cejudo trained with current UFC Flyweight Champion Brandon Moreno who at that time was not on the UFC roster yet. Cejudo would go on to win a close split decision, earning him a UFC title fight against the greatest UFC Flyweight of all time, Demetrius Johnson at UFC 197. Unfortunately, Cejudo would lose the fight by first round TKO, but afterwards, he was given the opportunity to coach The Ultimate Fighter against other top UFC Flyweight Joseph Benavidez. It was a very close back and forth fight, but in the end, Benavidez was given the split decision win and Cejudo had to deal with what he thought was a "complete robbery."

On May 13, 2017, Cejudo was expected to face now current Bellator Bantamweight Champion Sergio Pettis at UFC 211 but had to pull out of the bout due a hand injury. His next fight was then scheduled for UFC 215 against Wilson Reis. He won by TKO, 25 seconds into the second round, also winning his first-ever UFC Performance of the Night bonus award.

Cejudo and Sergio Pettis were rescheduled to fight each other on December 2, 2017 at UFC 218 and Cejudo went on to win via unanimous decision securing himself a second shot at the UFC Flyweight Championship and the great Demetrius Johnson. Their rematch was booked for August 4, 2018 at UFC 227 as a co-main event. The fight was extremely close with both fighters having their moments in the fight but the judges ended up giving Henry Cejudo the razor thin split decision and he became the second UFC Flyweight Champion ever as well as the first Olympic gold medalist to win a title in the UFC.

After beating Demetrius "Mighty Mouse" Johnson for the UFC Flyweight Championship, Cejudo made his first title defense against the current bantamweight champion T.J. Dillashaw on Saturday January 19, 2019. Cejudo came out strong and overwhelmed Dillashaw to win by TKO in 32 seconds, successfully defending his flyweight belt and becoming the undisputed UFC Flyweight Champion. It was later announced that Dillashaw would be suspended for two years by USADA due to testing positive for EPO prior to and after the fight and therefore he would relinquish his bantamweight title as well. Cejudo took advantage of the opportunity and went on to headline his first-ever PPV fighting Marlon Moraes for the vacant UFC Bantamweight title on June 8, 2019 at UFC 238. Cejudo won via third round TKO, becoming the fourth UFC fighter to win belts in two divisions simultaneously. However, he unfortunately would become inactive until 2020 due to a shoulder injury and eventually decided to relinquish the UFC Flyweight Championship and focus on the bantamweight division.

Cejudo's next fight was scheduled to be against former UFC and WEC Featherweight Champion Jose Aldo on May 9, 2020 at UFC 250. However, Aldo would pull out of the fight in April due to visa issues and later, due to the COVID-19 pandemic and many events falling out, the event would be rescheduled as UFC 249 with Cejudo fighting former UFC Bantamweight Champion Dominick Cruz in the co-main event. After defeating Dominic Cruz by TKO in the second round, Henry "the messenger" Cejudo announced his retirement from MMA.