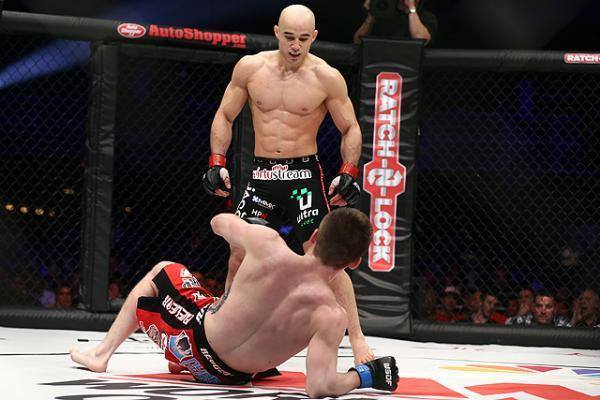 Fighting for a major organization has made Marlon Moraes ineligible for regional rankings.

Marlon Moraes is a Brazilian born Mixed Martial Artist currently fighting out of The Armory in Jupiter, Florida. Moraes began training Muay Thai at age 7, then BJJ at age 15. He is a black belt in Muay Thai, and a black belt in BJJ under Ricardo Almeida. He won 2 Brazilian National Thai Boxing Championships, then later transitioned into MMA.

Marlon's start into Professional MMA was decent, going 4-2-1 in his native Brazil, getting stopped in both of his loses. He would travel to England and choke out Nicolas Joannes in the first round before relocating permanently to the United States.

He defeated veteran Ryan Bixler with a keylock in his US debut. He would be submitted in his next two outings, first by tough veteran Ralph Acosta in the second round, and then by long-time Lithuanian contender Deividas Taurosevicious in the first. Now 6-4-1 in 11 pro fights, Moraes was inconsistent at best. He would bounce back impressively with a tough decision win over Chris Manuel followed by a crisp KO over former XFC BW champion Jerrod Card early in the first round.

Now on a 2 fight winning streak, Marlon would get his name called to fight a true UFC veteran in Miguel Torres at the inaugural World Series of Fighting event. Marlon looked very sharp in his performance, edging out a split decision over Torres in a very close fight. Marlon would look even more impressive in his next fight, knocking out unlikely prospect Tyson Nam with a beautiful head kick in the first round. Now finding a home at WSOF, he would fight again, this time earning a clear cut decision over rising star Brandon Hempleman, who was all heart for 15 minutes. In his last fight, he looked better than ever, knocking out tough prospect Carson Beebe with a beautifully timed counter punch that turned out the lights. Marlon is now 4-0 in WSOF, and 6-0 since his last defeat.

Moraes would get a shot at the vacant bantamweight title when he faced off against Josh Rettinghouse at WSOF 9. Moraes would cruise to a Unanimous Decision victory, he utilized some devastating leg kicks throughout the fight that left Rettinghouse looking like he couldn't stand on it at times.

UFC fight night 123 on December 9th 2017 saw moraes face aljamain sterling. Moraes won the fight by ko in round one.

On June 1st 2018 Moraes faced Jimmie Rivera at UFC fight night 131. Moraes won the fight in stunning fashion by head kick and ground and pound just 33 seconds into the fight.

On Saturday February 2nd Moraes defeats Raphael Assuncao in the main event at UFC on ESPN+2. The fight lasted just over three minutes.  Moraes won by submission guillotine choke. This win makes three first round finishes for moraes against the top of the division.