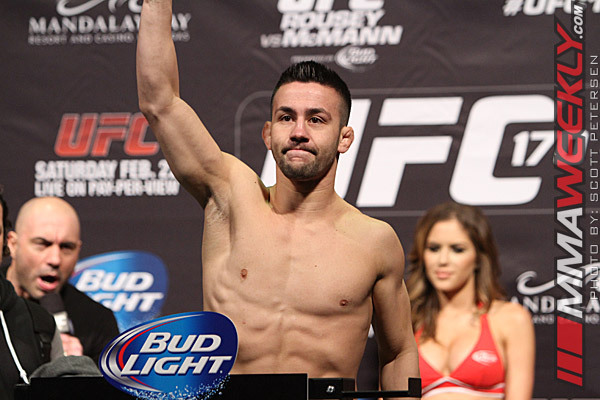 Fighting for a major organization has made Pedro Munhoz ineligible for regional rankings.

Pedro Henrique Lopes Munhoz was born and raised in Sao Paulo, Brazil. Munhoz first got interested in martial arts after watching Royce Gracie fight when he was young. As a toddler he got involved in fights with his cousins which were organized by and attracted folks from his neighborhood. Munhoz began training in Shotokan Karate at the age of six. He would soon take up judo and add Brazilian jiu-jitsu by thirteen. Munhoz is a black belt in BJJ and a brown belt in judo.  At sixteen, Munhoz fought and won his first Vale Tudo bout after being encourage to try it by his coaches. At eighteen, Munhoz started to round out his MMA game by training in boxing and Muay Thai. Outside of MMA, Munhoz is a six time BBJ Sao Paulo State Champion and a two time Brazilian National No-Gi Champion. Munhoz also has a Bachelor's Degree in Physical Education. Munhoz's wife introduced him to yoga and other meditation practices, which he credits with helping him calm his nerves.

He began his professional MMA career in 2009 with a second round win by submission to strikes. He would win two more fights in his native Brazil before moving to the US in 2010 to cross-train at Black House and Kings MMA. Over the next year, he would pick up another three wins to improve his overall record to 6-0. After taking over a year off from competition, he would be signed by RFA in late 2012. After picking up two first round submission wins, Munhoz would be given a shot at the vacant RFA bantamweight title. He would be paired up with UFC veteran, Jeff Curran, at RFA 9 and was able to win the title with a split decision. He would defend the title one time, against Billy Daniels at RFA 12 and he would win by submission in just 41 seconds.

In early 2014, Pedro was picked up by the UFC as a late replacement against Raphael Assuncao at UFC 170. Throughout the fight, he was able to keep up with the long time UFC veteran, but ultimately, Assuncao's superior striking and cardio would prevail resulting in a unanimous decision loss for Munhoz. He would get back on track though and win his next two fights for the UFC finishing Matt Hobar by TKO (The Ultimate Fighter Brazil 3 Finale: Miocic vs. Maldonado) and Jerrod Sanders by guillotine choke (UFC Fight Night: MacDonald vs. Saffiedine). Munhoz's win over Sanders was overturned to a no contest after he tested positive for exogenous testosterone.

Since his win over Garbrandt, Munhoz has gone 1-4 with one no contest, with every fight going to the judges. He has been involved in a Fight of the Night bout three times during this run, with a win over Jimmie Rivera (UFC Fight Night: Rozenstruik vs. Gane) and losses to former UFC Lightweight Champion Frankie Edgar (UFC on ESPN: Munhoz vs. Edgar) and former UFC Bantamweight Champion Dominick Cruz (UFC 269). Munhoz's other two losses were to future UFC Bantamweight Champion Aljamain Sterling (UFC 238) and former UFC Featherweight Champion Jose Aldo (UFC 265). His most recent fight with Sean O'Malley (UFC 276) ended in a no contest after an accidental eye poke left Munhoz unable to continue the fight.