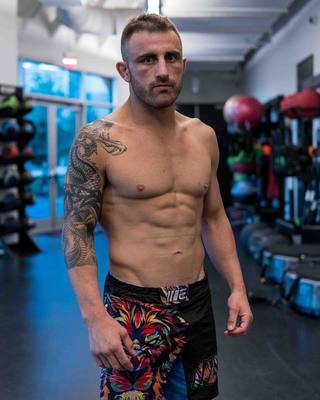 Fighting for a major organization has made Alexander Volkanovski ineligible for regional rankings.

Born and raised in Windang, Austrailia - he is an Austrailian citizen of Macedonian and Greek heritage. A powerful athlete with the natural frame of a bantamweight - he has made a career by defeating lightweights and featherweights, who often had superior MMA records on paper, at the time.

Starting off as a kid with Freestyle / Greco-Roman wrestling training, he would win a national wrestling title in Austrailia among other regional competitions. As he grew older his focus switched to rugby fulltime, however he still enagaged in MMA and wrestling based workouts throughout his entire rugby career, as way of improving his conditioning and overall athletic output for rugby.

In 2010, he won the Austrailia Mick Cronin Medal as 'Group 7 player' with the "Warrilla Gorillas" team, winning the Rugby Premiership of 2011 with the same team.

Deciding to finish rugby in 2012, he would go back to his combat roots and start competing in MMA fights within his first year of fulltime training, turning pro later on. He splits his time between "Freestyle Fighting Gym" of Windang, "Tiger Muay Thai" in Phuket, Thailand.

He made his UFC debut at UFC Fight Night 101 in Austrailia, with a 2nd round stoppage of Yusuke Kasuya.

At UFC 110, he would meet another Japanese veteran in Mizuto Hirota, at home once again in Austrailia. With a victory in the contest, he move to 3 - 0 against fighters from Japan.