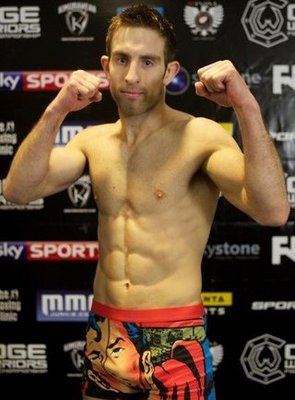 Phil Harris is ineligible for regional rankings due to inactivity.
Fighters must have at least one completed MMA bout in the past two years to be ranked.

Phil Harris holds a black belt in Judo and trains out of South Coast Submissions in Portsmouth, England. He is a veteran of Cage Rage, BAMMA, Cage Warriors, the UFC and has a notable win over Ulysses Gomez. Of his twenty two wins, seventeen have been finishes including thirteen submissions. He has a no contest on his record that was due to a cut he received due to a faulty cage.

Harris started out in the style of Judo, competing up to, and at the start of his MMA career, earning a black in the discipline. His premier achievements including a silver at the British junior Championships, and a bronze at the English open. Throughout his career he has also been active on the UK submisson grappling circuits.

Harris began his career in 2003, fighting around the British Isles. He had a notable fight early in his career against future UFC champion, Jose Aldo, but he came up short, losing by TKO in the first round. By 2010, he had compiled a 19-9 1 NC record. For his next fight, he would make his flyweight debut at Cage Warriors 46 in Kiev, Ukraine and was able to pick up a first round submission. This was his first fight outside of Britain. He would again fight outside of his homeland when he picked up a unanimous decision win at Cage Warriors Fight Night 4 in the United Arab Emirates.

Phil was signed to the UFC in mid 2012. In his debut fight, he would take on the highly touted Darren Uyenoyama at UFC on FX 5, but would lose by submission in the second round. He would bounce back with a decision win over Ulysses Gomez four months later in his native England. He was scheduled to fight John Lineker at UFC 163, but he had to pull out after fracturing his orbital bone in practice. Their fight was rescheduled to UFC Fight Night 30 in Manchester, England, but it became a catchweight fight after Lineker missed weight at 128 pounds. The fight was stopped midway through the first round with Harris losing via TKO. He next faced Louis Gaudinot at UFC Fight Night: London. He was submitted in the first round with a guillotine choke.

Harris announced his retirement from professional fighting on December 31st 2014 via Twitter.