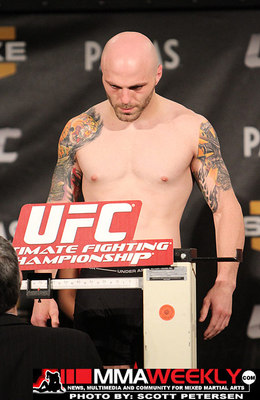 Justin Edwards is ineligible for regional rankings due to inactivity.
Fighters must have at least one completed MMA bout in the past two years to be ranked.

Justin Edwards began his MMA training in 2006 the day after watching an MMA fight on TV  and decided he could do it as well. In October of that year Edwards made his amateur debut and went 6-0 before losing 3 straight. He decided to go pro after that and would again go on a 6 fight win streak.

Edwards was a replacement for Keon Caldwell on The Ultimate Fighter Team Lesnar vs. Team Dos Santos. Edwards would face the future winner of the season Tony Ferguson but would lose via an upkick that knocked him out. He was set to fight in the wild card round but was not cleared in time for the fight. He would stay signed on with the UFC and make his debut against Clay Harvison on The Ultimate Fighter 13 Finale. He would lose a split decision but follow up with a Unanimous Decision victory over Jorge Lopez before dropping another decision to John Maguire. He would then sit out for a year before submitting Josh Neer at UFC on FX 5. He would next face highly touted Brandon Thatch at UFC Fight Night 27. He lost by TKO in the first round. Edwards made his lightweight debut against Ramsey Nijem at UFC Fight Night 35, but would lose by unanimous decision. This marked the first time he had lost consecutive fights in his career and put his UFC record at 2-4.