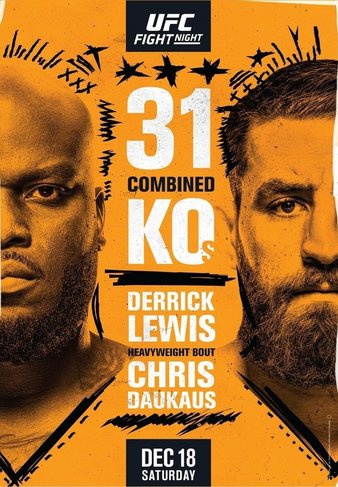 I dont really think he ever has been; thats why I like derrick so much. You look at him and the way he acts in and out of the octagon and he doesn't look anything like a fighter. Even in the octagon he literally just ignores fundamentals like bjj and wrestling

caio is out. Gerald replacing him. You really aren't wrong they wanna kill stoltzfus. may be the worst mismatch ive seen

Lewis vs. Daukaus
Chris Daukaus, TKO, R1
You see the issue with Lewis is that he can knock out anyone and has great anti-jujitsu powers, but he's also Derrick Lewis. Like everyone in the top 15 is a way more technical fighter, so pretty much anyone can beat him, but he can also beat anyone because his power is insane. Chris could do what Gane did, or something similar, but Lewis could just want to land a punch and end his hot streak. Basically I'm saying that my feelings of a lewis fight are "Oh! Derrick Lewis!" or "oh... Derrick Lewis..."

Tapology members can make predictions for upcoming MMA & Boxing fights. UFC Fight Night is still open for picks to be entered. Create an account to make your predictions.