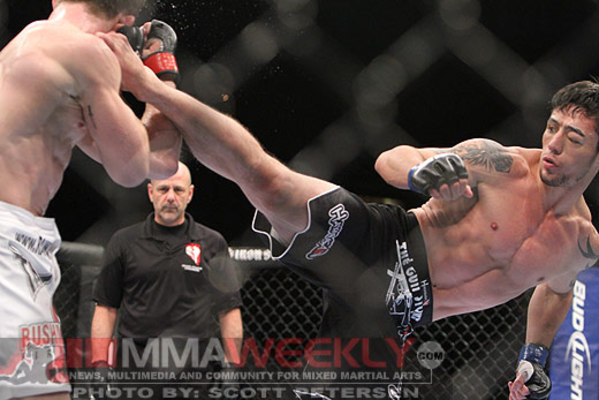 Diego Nunes began his MMA career in May 2004, when he defeated Jorge Velho Santos by TKO. After his first victory, Nunes started a string of ten straight victories all in the first round, winning both by knockout and by submission. After finishing Marcelo Franca at Shooto: Brazil 8, Nunes had the opportunity to fight outside of Brazil after attracting the attention of American promotions.


Nunes signed with the Zuffa-owned WEC and compiled a solid 4-1 record and his only loss coming by way of decision to wrestler L.C. Davis. All of his WEC fights were contested at featherweight, with his biggest win coming as a slight upset over then better-known Raphael Assuncao via split decision.


When Zuffa decided to fold the WEC's lighter weight classes into the UFC, Nunes came along to the organization, making his debut against Mike Brown on January 1, 2011 at UFC 125. He won the preliminary-card fight via split decision, notching the victory over the former divisional champion and setting himself up for a high-profile match with new 145 pound contender Kenny Florian, who had just dropped down from 155 pounds.  Nunes lost a close fight, getting outpointed by the veteran Florian but badly rocking the American at the end of the 3rd round and earning respect as a tough opponent in the process. Nunes rebounded from the loss with a unanimous decision victory over Manny Gamburyan at UFC 141, but then a loss to German striker Dennis Siver a few months later. He bounced back with a Fight of the Night victory over Bart Palaszewski before losing to Nik Lentz. Following the loss he was cut from the UFC.

All of Nunes' UFC and WEC bouts have gone the distance. As a fighter he has never been stopped, but also has been unable to notch a submission or KO/TKO victory yet in the major leagues of MMA.

Following his release from the UFC it was later announced that Nunes had signed a deal with Bellator. He would drop his first two fights for the promotion to Patricio Freire and Matt Bessette.