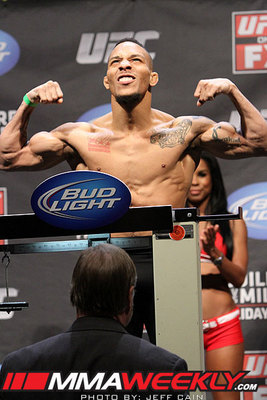 Mike Easton is ineligible for regional rankings due to inactivity.
Fighters must have at least one completed MMA bout in the past two years to be ranked.

Mike Easton began his MMA training at 17 years old under Lloyd Irvin who he would later receive his black belt in Brazilian Jiu Jitsu from in 2007. Easton also holds a black belt in Tae Kwon Do. He was a  Bronze Medalist in 2008 Brown Belt BJJ mundials, WKA World Champion and WKA National Champion.

Easton made his professional debut in 2003 for Reality Fighting, he would fight to a 5-0 record before he suffered his first loss. He broke his arm while trying to block a kick, and was actually talking to his corner man trying to figure out what was wrong with it while he was still getting punched in the face by the other fighter. His corner ended up throwing in the towel handing Easton his first loss. When he returned to fight again it was for Ultimate Warrior Challenge and after two wins including a Split Decision victory over John Dodson he would earn a title shot. He would defeat Justin Robbins for the UWC Bantamweight Championship with a submission in the third round. He would defend the title twice with one of the victories a very close Split Decision victory over Chase Beebe.

It would be a few years before he fought again but when he did it would be for the UFC defeating Byron Bloodworth by TKO in the second round. He would then go on to defeat Jared Papazian and Ivan Menjivar by decision improving his UFC record to 3-0 before losing his first fight in the promotion to Raphael Assuncao by Unanimous Decision.

Following his loss to Assuncao, Easton was scheduled to face Brad Pickett at UFC on Fuel TV: Mousasi vs. Latifi on April 6, 2013. In a performance that earned both men Fight of the Night Honors, Easton was handed his second straight loss after Pickett won a split decision verdict.

Easton would then hope to get back on track against future bantamweight champion T.J. Dillashaw on January 15, 2014 at UFC Fight Night: Rockhold vs, Philippou. After three round of fighting Easton dropped his third fight in a row to Dillashaw, losing via unanimous decision.

In what was to be his final appearance inside the Octagon, Easton lost his fourth consecutive bout to Yves Jabouin at UFC 174 via unanimous decision. Easton was subsequently released from the UFC.