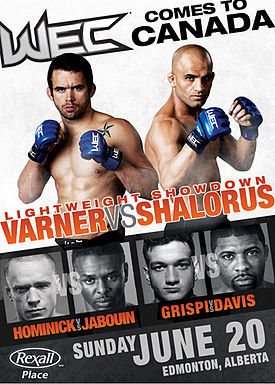 Tapology members can make predictions for upcoming MMA & Boxing fights. WEC 49 is closed for new predictions. 4 total members made predictions on this event, breaking down as follows below.

Leaderboard of the best predictions by member: WEC 49 Leaderboard

In the first WEC event to be held outside of the United States, WEC 49, which took place at Rexall Place in Edmonton, Alberta, Canada, featured a main event lightweight showdown between former champion Jamie Varner and undefeated Iranian wrestling standout Kamal Shalorus. Although the undercard produced some of the best fights of the first half of 2010, the main event left most fans unsatisfied, as the judges scored the contest a Split Draw.

Fightmetric.com, as well as the majority of leading industry analysts, argued that the decision should have gone to Varner, who landed the more damaging shots and controlled the majority of the fight, especially in the first two rounds.

The WEC produced this video previewing the Varner vs. Shalorus event, focusing on its arrival in Edmonton, Alberta, Canada.