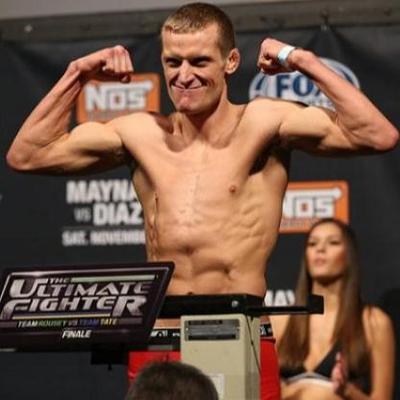 Fighting for a major organization has made Davey Grant ineligible for regional rankings.

David Grant is a British bantamweight fighter currently signed to the UFC. He trains out of Bishop Aucklund, England. He was a competitor and runner up on season eighteen of The Ultimate Fighter. Of his eight professional wins, all have been finishes including seven submissions.

Grant began training in kickboxing in his youth to stay in shape and eventually added grappling as well. Throughout his teenage, he would continue to dabble in martial arts but began to take it more seriously after he finished school. He make his amateur debut in 2008 for Total Combat with a first round submission win. He would fight in five consecutive shows for the promotion over nine months and was able to compile a 3-2 record with all of the fights ending in the first round by submission. He would make his professional debut with the same promotion in mid 2009, but would lose by armbar in the first round. He would take over a year off of competition to regroup, but when he returned, he came back with a vengeance. He would rattle off five straight victories over the next year, with all of them coming by way of submission to a choke. He would also pick up the first TKO win of his career in 2012 at Total Combat 46. He would go on to win two more fights in two other British promotions along with the bantamweight belt in Made for the Cage.

In 2013, David was selected to appear on The Ultimate Fighter 18. In his first fight to get into the house, he fought Danny Martinez. He committed two fouls and had a point deducted in their fight, but was able to finish Danny in the second round with a armbar, so the deduction did not matter. In the fifth episode of the season, David faced Louis Fisette who previously lost and came back as a injury replacement. He dominated the first round with ground and pound and in the second round, he took Fisette down right away and caught him in a rear naked choke to win. On episode twelve, David was set to face Anthony Gutierrez, however, his opponent could not make the 136 pound limit to fight and had to forfeit. Grant advanced to the TUF 18 Finale to face Chris Holdsworth.

Grant made his official debut at The Ultimate Fighter 18 Finale. In his finals fight with Holdsworth, he was able to hold his own throughout the first round, but in the second, Chris swarmed him and was eventually able to submit him with a rear naked choke midway through the second round. He is next set to take on Roland Delorme at UFC Fight Night 37 in London, England.

Episode 1 Grant def. Danny Martinez by Submission (armbar) at 2:02 of Round 2

Episode 5 Grant def. Louis Fisette by Submission (rear-naked choke) at 1:01 of Round 2

TUF 18 Finale Chris Holdsworth def. Grant by Submission (rear-naked choke) at 2:10 of Round 2