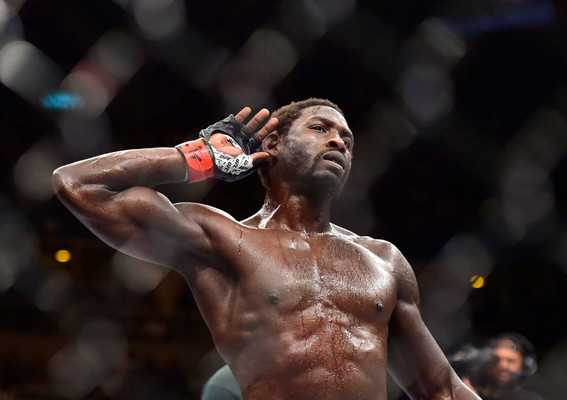 Fighting for a major organization has made Jared Cannonier ineligible for regional rankings.

Jared Cannonier Is a middleweight fighter currently competing under the UFC banner. He began his amateur career as a heavyweight fighting under the Alaska Fighting Championship banner where he would end up going 2-0 as an amateur. He would turn pro in 2011 fighting in various promotions around Alaska including AFC and AK Entertainment. He would win his first 7 pro fights on the Alaska regionals before signing with the UFC.

He would make his first walk to the octagon on the prelims of UFC 182: Jones vs. Cormier where he would take on Shawn Jordan, he would lose the bout via KO 3 minutes into the first round. Following his first defeat Jared bounced back with a first round KO over Cyril Asker at UFC Fight Night 8. After his first UFC win, Jared would make the decision to move down to Light Heavyweight where he would take on Ion Cutelaba on the main card of The Ultimate Fighter 24 Finale. Jared would enter the fight as a +200 underdog but would go on to win a unanimous decision and be awarded with fight of the night honors. His next fight would be against Glover Teixeira on the main card of UFC 208: Holm vs. de Randamie, he would lose the fight via unanimous decision. Jared would then fight
Nick Roehrick on The Ultimate Fighter 25 Finale, and would finish the fight with elbows in the third round. Jared would then go on to lose two back to back fights against Jan Błachowicz & Dominick Reyes. This prompted him to make a move down yet another weight class.

Jared Cannonier would make his middleweight debut against David Branch as a +255 underdog at UFC 230: Cormier vs. Lewis, he KOd Branch 40 seconds into the second round which earnt him a performance of the night bonus. He would then take on former middleweight champion Anderson Silva at UFC 237: Namajunas vs. Andrade. He won the fight via leg kicks near the end of round one. Jared would then get a shot at the top 5 of the divison as he took on Jack Hermansson in the main event of UFC on ESPN+ 18. He would run into trouble in the first round as Hermansson managed to take him down and get on to his back but Jared weathered the storm and made it up where he landed some heavy leg kicks that appeared to hurt Jack at the end of round one. At the start of round two Jared landed an uppercut that dropped Jack and lead to the finish by ground and pound from Jared Cannonier who stopped Jack 27 seconds into the second round.
Coming off of his first main event win and being ranked number 5 in the world Jared Cannonier got a shot against divisonal number one contender and former middleweight champion Robert Whittaker on the main card of UFC 254: Khabib vs. Gaethje. After a closely contested three round fight which saw both fighters close to being finished, Robert Whittaker would pick the unanimous decision win.

Jared Cannonier broke his arm in the fight with Whittaker trying to block a headkick which left him sidelined for a few months. He is currently scheduled to take on Kelvin Gastelum in the main event of UFC Fight Night: Cannonier VS Gastelum after his original opponent Paulo Costa pulled out of the fight.
As of the 26th of July 2021, Jared Cannonier Is ranked at #3 in the UFC middleweight rankings.