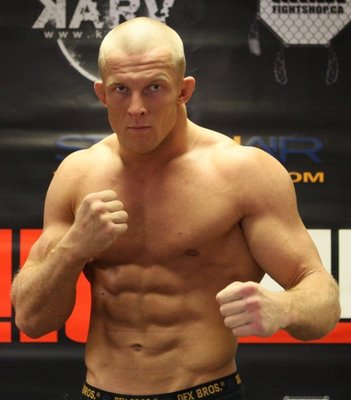 Fighting for a major organization has made Misha Cirkunov ineligible for regional rankings.

Born in Riga, Latvia, Cirkunov began swimming at 6 and enjoyed the physical activity. After discovering Karate classes available in the same gymnasium, he took it up, before later switching to Judo at the invitation of a friend who already was a champion in the style. He continued in Latvia until age 13, when himself and his parents relocated to Toronto, Canada.

Upon arriving in his new hometown, the family looked to settle in and learn the new language, as well as the Candian culture and ways. Cirkunov found a local gym that offered Judo classes. Entering the gym, Cirkunov was astounded by the quality of the facility, and the services it offered, surpassing anything similar back in Riga at that time.

He restarted Judo while also adding Freestyle Wrestling in highschool, competing and training around the region and nationally in both styles. With new found coaching services, he also began quality strength and conditioning sessions.

One day, sparring began with a lighter, smaller opponent at his Judo gym, who was a blue belt in Judo. Cirkunov who was superior to his foe physical strength and rank, was humbled and submitted by the smaller man. This opponent had training and knowledge in submission grappling and MMA, styles alien to Cirkunov at the time. This sparked his interest in MMA and submission grappling.

Upon graduating highschool, Cirkunov found work as a bouncer. Later, at the encouragement of friends, he took a several month long training trip to Vegas, to check out some gyms and try to soak up some MMA knowledge and culture. He would continue working and training in Canada and the U.S for the next few years,  with a run at MMA in mind.  Satisfied with his progress, he debuted as pro in 2010.

Building a 9 - 2 record, he was signed to the UFC in 2015.  He is nationally celebrated in Latvia, the Baltic nation following his career and fights with excitement and anticipation.

Cirkunov was expected to make his promotional debut against Sean O'Connell on August 23, 2015 at UFC Fight Night 74. O'Connell withdrew from the bout due to injury and was replaced by Daniel Jolly. Cirkunov defeated Jolly via first round KO after achieving full mount and battering him when he turned his back.

Cirkunov faced promotional newcomer Alex Nicholson on February 6, 2016, at UFC Fight Night 82. Cirkunov submitted Alex Nicholson via a second-round neck crank, breaking both sides of his jaw in the process, after earlier breaking his nose.

Cirkunov next faced another promotional newcomer in Ion Cutelaba on June 18, 2016 at UFC Fight Night 89. He won the fight via submission in the third round.

Cirkunov faced Nikita Krylov on December 10, 2016 at UFC 206. He won the fight via submission in the first round.