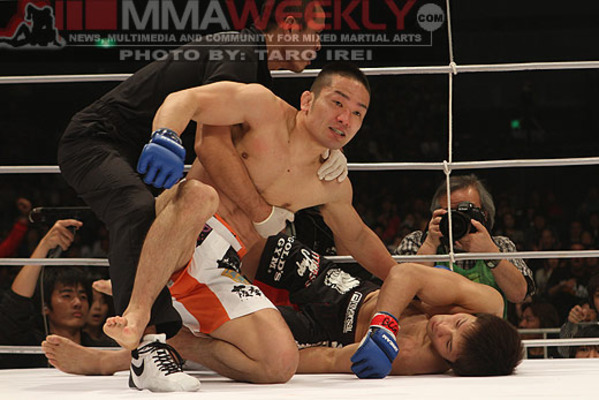 Katsunori Kikuno is ineligible for regional rankings due to inactivity.
Fighters must have at least one completed MMA bout in the past two years to be ranked.

Katsunori Kikuno is a Japanese lightweight fighter currently signed to the UFC. He is a black belt in Judo and a black belt in Kyokushin Karate and trains out of Alliance Square in Tokyo, Japan. He really exhibits his Karate background in his fights and is known for throwing Crescent Kicks. He has previously fought for DEEP where he was the lightweight champion and had an overall record of 16-3-2 as well as Dream where he had an overall record of 3-2. He has notable wins over Koichiro Matsumoto, Kuniyoshi Hironaka, Daisuke Nakamura, and Jutaro Nakao. He has also fought Satoru Kitaoka, Mizuto Hirota, Gesias Cavalcante, and Eddie Alvarez in losing efforts. Of his twenty one career wins, fourteen have been finishes including eleven T/KOs.

Kikuno began training in Judo in high school and took up Kyokushin Karate after he graduated. He began fighting professionally in 2005 with a draw under the ZST promotion. He would have his first fight with DEEP only a month later and was able to pick up two wins in a single night. Over the next three and a half years, he would bump his record to 12-1-2. He debuted with Dream at Dream 10 against Andre Amade who he was able to defeat by TKO in the first round to extend his undefeated streak to twelve. He took on Eddie Alvarez at Dream 12, but would lose by submission in the second round. He would pick up another TKO victory under the promotion before dropping a split decision to Gesias Cavalcante at Dream 15.

Katsunori would return to DEEP to defend his lightweight title against Nobuhiro Obiya via decision in October, 2010. He fight again for Dream, picking up a decision over future DEEP lightweight champion, Daisuke Nakamura. At DEEP 55, Kikuno would lose his title to Mizuto Hirota. He would pick up a TKO victory two months later before dropping another decision at DEEP 58. After this, he would go on a four fight win streak over the next year, picking up three finishes along the way.

In late 2013, it was announced that Kikuno had been picked up by the UFC. He made his debut against Quinn Mulhern at UFC Fight Night 34 and was able to bump his undefeated streak to five when he won via unanimous decision.

Kikuno's six fight win streak came to an end when he fought Tony Ferguson at UFC 173. Kikuno came out strong, but Ferguson was stronger, sinking in a choke that Kikuno was able to get out of, but was knocked out moments later, at 4:06 in Round 1.

For the first time since being signed to the UFC, Kikuno was fighting in his home country of Japan. There he faced TUF 15 veteran Sam Sicilia, at UFC Fight Night 52: Hunt vs. Nelson. Kikuno used his superior grappling to finish this fight, when he forced Silcia to tap at 1:38 in Round 2.

Kikuno faced Edimilson Souza, at UFC Fight Night 62: Maia vs. LaFlare. At first both fighters weren't engaging one another, but suddenly Souza exploded with a series of punches. Kikuno did his best to block most of the strikes but a right hand by Souza connected and knocked-out Kikuno, at 1:31 in Round 1.