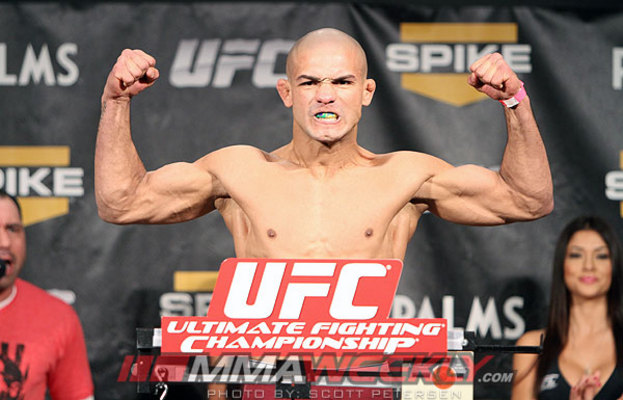 Fighting for a major organization has made Diego Brandão ineligible for regional rankings.

Brandão was born in Ceara and raised in Manaus. Around the age of sixteen Diego's father died. The last words of his father was that Diego was to take care of his family. Diego began selling drugs and missing school to try and do this but eventually through a friend, Diego left the drugs aside to devote himself to martial arts.

Brandao joined the Ultimate Fighter in 2011 and made it into the house with his first round finish of Jesse Newell. He became the number 1 pick joining Team Bisping. In his first fight in the house Diego would knock out Steven Siler only 30 seconds into the first round. He would then defeat Bryan Caraway by another first round finish to send himself to the finale. In the finale he would square off against Dennis Bermudez. In the first round Diego would get dropped and hit with some heavy shots however he was able to secure the armbar for the victory. He won Fight of the Night as well as Submission of the Night, he said in the post fight interview that he wanted to buy his mother a house.

Diego would face his first lost in the UFC to Darren Elkins by decision at UFC 146. We would get back in the win column with a victory over Joey Gambino. He would then square off against Pablo Garza at UFC on Fuel TV 9 winning the fight in the first round with an Arm Triangle Choke. The Ultimate Fighter winner would make it 3 straight when he faced off against Daniel Pineda at UFC on FOX Sports 1 winning by Unanimous Decision. He closed out 2013 with a loss to Dustin Poirier.

He will look to start 2014 off with a win when he faces Conor McGregor at the main event of UFC Fight Night 46.

The Ultimate Fighter 14 Finale Brandao def. Dennis Bermudez by Armbar at 4:51 of Round 1